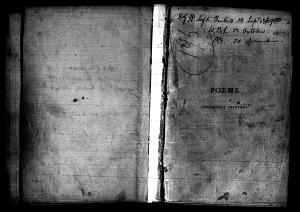 This is copy two of the Princeton/Troxell collection's unique pair of copies of the Penkill Proofs, so called because they were completed and sent to DGR on 18 August 1869, two days after he arrived at Alice Boyd's home Penkill Castle, in Ayrshire. He stayed at Penkill until 20 September.

These proofs were being set in type in July, as DGR's letters to Jane Morris of 21 and 30 July 1869 show (see Bryson and Troxell: 8, 11). The proofs were not finally printed off, however, until 18 August because DGR was revising and adding poems continually during the printing process. The Penkill Proofs are the first integral set of proofs that were prepared for DGR as part of the printing process that would eventuate in the 1870 Poems . They comprise Lewis's second Proof State (see The Trial Book Fallacy , 186).

Various poems in the later part of these proofs have been numbered in pencil by DGR. These numbers correspond to a sequence of pages he projected for the ordering of the printing of the poems in the next stage of the revision process, as DGR's note at the beginning of “ The House of Life” in these proofs shows. The companion of these Penkill Proofs, Copy 1, has some numbers of the same kind, though fewer, and they strongly suggest that DGR was discussing the issue of sequence with William Bell Scott. These numbers permit one to reconstruct the ordering of the poems as they would have appeared in the A Proofs, which descend directly from the Penkill Proofs. (The only perfect copy of the A Proofs known to exist is in the library of Simon Nowell Smith.)

This copy of the Penkill Proofs has more corrections of accidentals than the other copy. Both carry numerous notes to the printer about typeface and page design. This second copy has a few scraps of manuscript additions added to the proofs on separate leaves.

These proofs were being set from texts that DGR supplied to his printers (Strangeways and Walden) before he left London on 17 August 1869 for a sojourn at Penkill Castle in Scotland (see Fredeman, Correspondence, 69.116, 69.125).

The printing process stretched between approximately 18 July and 18 August 1869. On 7 August DGR wrote to his publisher Ellis, who was overseeing the printing process, that the poems should each begin on a separate recto page, except for the longer poems. These he allowed to be printed on both sides of the page, though each new poem was to begin on a separate recto. As a consequence, poems that ran only one page or less all have blank versos. It has been suggested that this method of printing would allow DGR greater flexibility in shifting his poems about, as he experimented with the ordering of the different works. But it is not at all clear that such a procedure would have any significant impact on the printing process, at least for the printers who were preparing the works. On the other hand, such a format may well have facilitated the revision process DGR would be executing on the proofs.

The texts missing from this proof can be reconstructed from various documents. Most important is DGR's manuscript list (partial) of some of the poems he wanted printed in this first set of proofs. The list is contained in the notebook of materials in the Troxell Collection at Princeton headed MS Poetry 1869-71 . (Also relevant is DGR's letter to his brother of 21 August 1869: Fredeman, Correspondence, 69.130.) From these documents one can see that pages 66-67 carried “ A Song and Music,” pages 85-86 printed “ To Mary in Summer,” pages 91-92 had “ Madonna” (printed under the title “Madonna Consolata”), and pages 137-138 had “ Placata Venere,” which was the original title of “ Nuptial Sleep.”

A partial set of proof pages for the First Trial Book is bound up at the end of these proofs. Scott's notes on these proofs say that DGR left them with Scott at Penkill Castle when the poet went to London on 20 September 1869 after his sojourn at Penkill, but he must have misremembered for these proofs could not have been printed when DGR was still at Penkill. Scott's notes speak to the missing pages in the Penkill Proofs and the poems that were on those pages.