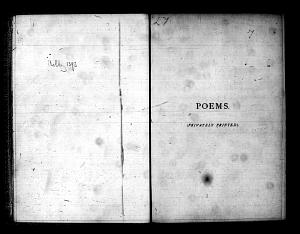 This is a near perfect copy of the first state of the First Trial Book, printed about 3 October 1869. Lewis calls it Proof State 6 (see The Trial Book Fallacy , 186). It is probably the copy sent by DGR to WMR. DGR's letters to his brother of 14 and 15 September (Fredeman, Correspondence, 69.154, 69.156) detail many of the alterations that would eventually be incorporated into this trial book, though some appeared first in the second state of this trial book as well as in the intermediate A2 Proofs. And for two poems, “ Troy Town” and “ Eden Bower,” a proof was printed off prior to the printing of the full trial book. The letter to WMR of 21 September (Fredeman, Correspondence, 69.162) speaks of the recent composition of “ Troy Town,” which first appears in this trial book, while the letter of 3 October (Fredeman, Correspondence, 69.168) mentions a change to “ Nuptial Sleep” which isn't here, but which is printed in the second state of these proofs. This record establishes the printing date of the present copy of the Trial Book. The Trial Book was probably printed shortly before 3 October.

DGR worked closely with his brother in the revisions he was making at this, the earliest stage of his proofing and revising process. Later he would rely more heavily on Swinburne's views as a second test reader for the changes he was experimenting with.

This work evolves from the revisions DGR made to the so-called A2 Proofs, which were in DGR's hands from approximately 21 September.

DGR's desire to construct his poetry into a coherent collection appears initially in this First Trial Book. Though moving toward an integral arrangement, particularly in the A and the A2 Proofs, the prepublication states previous to this are still being imagined by DGR as working depositories for poems that he is simply trying to gather together and consider for a book that, if printed, might well be issued privately. The inchoate state of the early printings is clear from the author's note in the A2 Proofs.

The First Trial Book is the fourth integral set of prepublication printings toward the work that would eventually appear as the Poems of 1870. Its printing in this the first state of the Trial Book was completed on or just before 3 October, but revisions made therein were quickly incoporated into the second state. A second copy of this first state of the trial book exists in partial form. This is the Princeton/Troxell partial set of DGR's working proofs . A set of ten additional pages from this copy, uncorrected, are separately preserved in the Princeton/Troxell collection). Two perfect copies of the second state of the First Trial Book exist: the so-called Losh copy (in the Princeton/Troxell collection), and the Fitzwilliam copy.