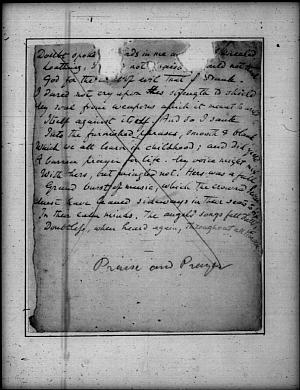 This is one of the three surviving manuscripts that were part of the book of poems DGR buried in his wife's coffin. All exhibit exactly the same kind of mutilation: two rough edged holes toward the top of the leaf showing where the paper, for some reason, has rotted away. DGR himself told Ford Madox Brown in a letter written right after the book had been recovered (13 October 1869) that the volume was mutilated in just that way, with “a great hole right through all the leaves of Jenny” (see Fredeman, Correspondence, 69.182). The other two manuscripts are: the manuscript in the British Library (Ashley Collection) of “Another Love”; the four manuscript leaves comprising the text of “Wellington's Funeral” (in the Beinecke Library, Yale University).

The sonnet was written originally in 1848, but this text was undoubtedly made by DGR in 1862. He crossed it out in 1869 when he chose not to include it in his soon-to-be-published 1870 Poems . The title is WMR's addition to the manuscript after DGR's death.

An interesting typescript letter from Janet Camp Troxell (3 Dec. 1949) accompanies this manuscript in the Houghton Collection. It quotes “what Mrs. Angeli wrote me about the leaf”: “I. . .do in fact possess one page (or did possess it until recently) to wh. my father had attached a note saying ‘this must be a page from the exhumed ms. book’ or words to that effect. . . .I was surprised last year (?) to learn that Sotheby's were selling another such page. . . . I did not know or had forgotten about the 3rd page among Wise's mss. I have no idea how these pages came to survive. . . . The note appended to the page I possess rather suggests that my father came across it at a later date”.