Current Location: Fitzwilliam Museum
Note: The bound volume containing this manuscript, as well as other manuscript documents of the poem, was given to the museum by Charles Fairfax Murray in 1905. 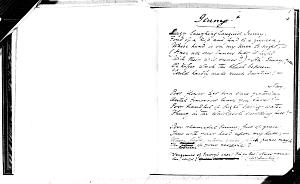 This is the working draft of the poem that DGR produced in October 1869 after he had made a copy of the text that had been buried in his wife's coffin in 1861. The copy made from the exhumed manuscript, as well as the latter, do not appear to have survived.

This holograph manuscript has three parts. The first part is DGR's draft of lines 1-83 (76 lines in the manuscript). At that point the poet began redrafting from the beginning, to produce a cleaner copy from the heavily revised initial manuscript draft. The second part of the document is this second copy, which represents substantially the text of the poem as it was printed in the Exhumation Proofs. The third part comprises two pages of additions, one of which went into the Second Trial Book, the other into the Proof for the First Edition of the 1870 Poems .

These paired documents are gathered and bound together in a leather notebook once the property of Fairfax Murray. Preceding them in the volume are two other texts of the poem: the non-autograph manuscript copy that stands closest to the text exhumed from DGR's wife's grave; and a typescript of the first three manuscript pages (lines 1-146) of the Delaware Manuscript of the poem.