Paper: 21.9 x 18 cm
Other Physical Features: There is a pencil sketch on the verso of the MS. 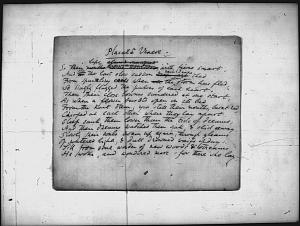 This is an early manuscript of the sonnet and predates the text that was printed in the A Proofs in mid-September 1869. It may even have been written as early as 1858, which is Jan Marsh's preferred date for the composition of the sonnet, or in 1861 when the first version of DGR's drawing Cassandra was done. Other possible dates are in the spring-summer of 1868 or August 1869.

The title of the poem in this manuscript is interesting. It is an ablative absolute and stands to the text of the poem as a kind of loose first line; so that the meaning (literally rendered) runs something like: “Venus having been satisfied, At length their long kiss...”.

The verso of the leaf has what appears to be a rough study for the figure of a Greek warrior—perhaps a study for Hector in the drawing Cassandra .