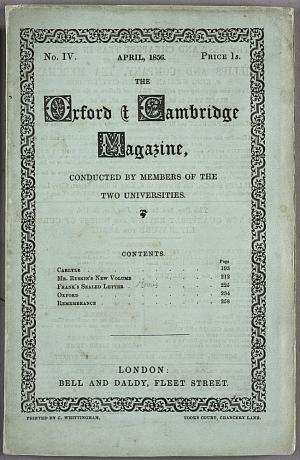 The fourth issue of The Oxford and Cambridge Magazine contains several important pieces. Probably the most significant is Burne-Jones’s review of Ruskin’s Modern Painters . Burne-Jones had already received a letter from Ruskin in response to the first issue of the Magazine, and he had long been planning to write a piece on Ruskin.

This issue also contains an essay by each of the Lushington twins, Godfrey and Vernon. Godfrey wrote an essay on Oxford, and Vernon, whom Burne-Jones had, months earlier, referred to as a future contributor to the Magazine ( Memorials 123), published the first installment of his five-part essay on Carlyle. A story by Morris (his only tale in the Magazine with a contemporary setting) and a poem by Fulford round out the sixty-six pages in the April issue, which was two pages longer than most issues. Burne-Jones had planned to write an essay on Fouqué (probably the German writer Friedrich Heinrich Karl de la Motte, Baron Fouqué) for the April issue ( Memorials 122), but this essay was apparently never written.

The first of Woolner’s two medallions became available in April. The medallion of Carlyle is advertised in an insert at the front of the issue, for the price of one shilling (the same price as the Magazine.)