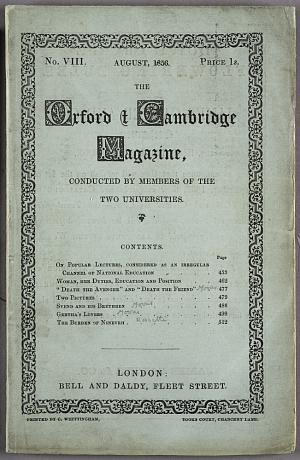 The August issue of The Oxford and Cambridge Magazine is probably the most important of the twelve. It includes not only DGR's first contribution, “The Burden of Nineveh,” but also the only two pieces on visual art: Morris's “Death the Avenger and Death the Friend” and Vernon Lushington's essay “Two Pictures,” which discusses DGR’s Dante’s Dream on the Day of the Death of Beatrice and Ford Madox Brown’s The Last of England. The other works in this issue are two stories by Morris (one new story, and the conclusion of Gertha’s Lovers), an essay by Fulford, and second part of Cracroft’ essay on popular lectures.

But August also began the descent of the magazine. Burne-Jones and Morris were spending a lot of time with Rossetti, and Street, the architect for whom Morris was then working, moved his office from Oxford to London. Morris and Burne-Jones moved in together in London, and Fulford complained that the others, particularly Burne-Jones, were not writing enough to fill the pages. Burne-Jones summed up his and Morris's feelings toward the Magazine in an August letter: “The Mag. is going to smash—let it go! It has had stupid things in it lately. I shall not write again for it, no more will Topsy— we cannot do more than one thing at a time, and our hours are too valuable to spend so” (Mackail 108). The Magazine did run for another four months, and Morris contributed to all of the later issues, but the energy and excitement of the previous December had clearly ebbed.

A copy of the January issue of the magazine was sent to Ruskin, and apparently he was still reading it in August. William Michael Rossetti quotes a letter from Ruskin to Dante Rossetti, in which he writes “I am wild to know who is the author of The Burden of Nineveh , in No. 8 of Oxford and Cambridge. It is glorious. Please find out for me, and see if I can get acquainted with him” (WMR, Family-Letters, 197).

This issue is also interesting bibliographically, as it contains the only cancel leaves.