The Oxford and Cambridge Magazine (May issue) 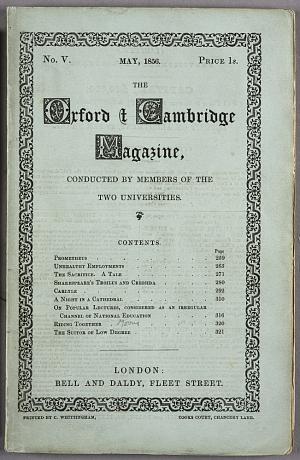 The May issue of The Oxford and Cambridge Magazine contains the first publications from Lewis Campbell, Georgiana MacDonald (later Burne-Jones), Bernard Cracroft, and Charles Faulkner. Lushington’s essay on Carlyle is continued from April, and this issue also includes a poem by Morris, and an essay , a story, and a poem by Fulford. It is the first issue to contain more than one poem.

The Magazine was already in decline when the fifth issue was published. Around Easter, Burne-Jones left Oxford without taking a degree, and moved to London to begin a career as an artist under the tutorship of Rossetti (Mackail 105). Though one of the most enthusiastic founders of the Magazine, during its run he became more infatuated with Rossetti, and eventually stopped submitting. His last publication in the Magazine was an essay on Ruskin, published in June.