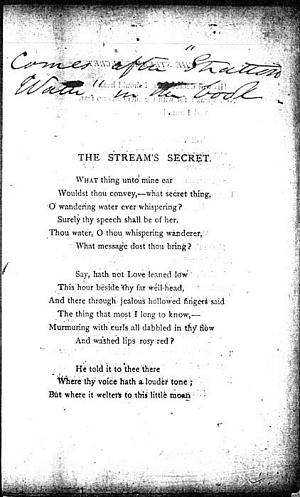 This is a set of proof texts of five poems that DGR added to his 1870 volume at the latest stage of its printing in March 1870. They represent a textual addition that would have been printed up for reviewers who had already received early review copies of the 1870 Poems in which these poems would not have appeared. This document represents a fairly late stage in the printing of these added poems; the earliest extant stage would be represented by the proof pages DGR sent to Jane Morris (British Library Add. MSS. 45353), probably only a day or two before these proofs were pulled. These proofs carry the revisions marked in the proofs sent to Jane Morris, as well as other revisions not called for in those proofs.

Another (uncorrected) set of these revise proofs is housed in the Huntington Library, and two others are in both the Fitzwilliam Library and in the Princeton/Troxell collections.

There were four states that this revise passed through; this is the third state.

Printed March 1870, just before the publication of the 1870 Poems in April.