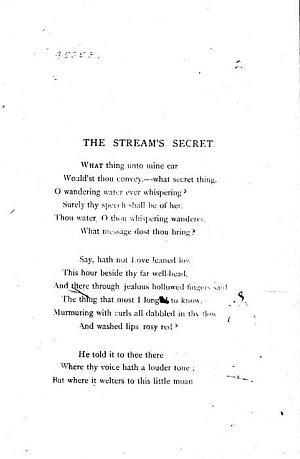 These are the earliest proofs of the five poems, and it is significant that DGR sent this copy to Jane Morris, rather than to Swinburne or his brother (who were also receiving regular sets of proofs for reaction and critique). It underscores the association of the poems with her, a fact emphasized in his letter to her of 30 August 1869 (see Bryson and Troxell 26-27). The association is particularly important with respect to “The Stream's Secret” .

The four additional sonnets are “The Love-Letter”, “Barren Spring”, “The Wine of Circe” , and “The Monochord”. The proof pages of these sonnets are here unpaginated and are discontinuous from the latter. However, they appear to have been printed on the same printer's sheet, as DGR's letter to Alice Boyd of 22 March 1870 also suggests (see Fredeman, Correspondence, 70.63 ).

There were four states that this revise passed through; this is the first.