Document Title: Poems and Sonnets
Author: DGR
Date of composition: 1848-1881
Type of Manuscript: various
Collation: 76 leaves
Note: Each original manuscript leaf is fixed to a page in the bound volume. 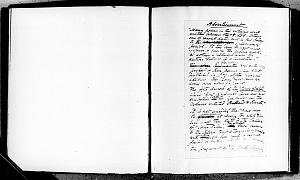 Many of the texts in this volume were originally printer's copy for various 1869 proof states set up for the 1870 Poems . They subsequently came into Charles Fairfax Murray's possession, and he arranged them in this bound volume with some thought, not rigorously pursued, to reflect the 1881 volume of Poems. A New Edition .

Fairfax Murray's arrangement of the final pages in this volume are problematic, especially as his choices often confuse the relationship between DGR's later additions to the poems and their insertion points. The edition presented here returns the manuscript pages to an arrangement which respects their grammatical sequence.