Document Title: M.S. Poetry 1869.70.71
Author: Dante Gabriel Rossetti and others
Date of composition: 1869-1871
Type of Manuscript: various, mostly fair copies
Note: There are 84 pages in the volume. DGR's manuscripts in the book date from ca. 1850 to November 1869.
Scribe: various; DGR's texts are all autograph

Cover: contemporary half calf with title on pastedown slip
Paper: quarto
Other Physical Features: The volume has various manuscripts pasted in, all of various sizes. 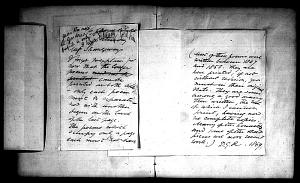 The DGR materials in this volume all relate to the production of the volume of poetry he published in 1870. This collection was probably put together by Alice Boyd at a somewhat later date, and largely from materials she had from William Bell Scott and DGR in 1869, when the two men were together at her estate in Scotland, Penkill Castle.

The volume contains a miscellaneous collection of poems, most by DGR and William Bell Scott, that date from the early 1850s to 1871, and a couple of letters. There are a few other poems by Christina Rossetti and Edmund Gosse and others. The DGR materials are manuscripts dating from ca. 1850 to November 1869.

The DGR materials cast interesting light on his earliest conception of the 1870 Poems and what he planned to include in it. The notebook contains lists that pre-date the printing of the Penkill Proofs and represent his thoughts about what to include in those proofs, the first he had pulled (in August 1869) for the volume to come in 1870. Also in the notebook are copies of poems that were made for the early proof printings of August and September 1869. Most important here are the manuscript texts of “Ave”, “Troy Town”, and “Stratton Water”.

Virtually all of the DGR manuscripts in this collecton show revisions of one kind or another, as well as variances from received texts.

The DGR manuscripts were probably not printer's copy for the proofs pulled in August and September 1869 but they were almost certainly the copy from which those printer's copies were made.