Mary Magdalene at the Door of Simon the Pharisee

Current Location: Fitzwilliam Museum, Cambridge
Catalog Number: 2151
Purchase Price: bequest
Archival History: First owned by Thomas Plint, the drawing disappeared after his death in 1860; Charles Ricketts found it by accident in a store in the Brompton Road in May 1898 (see Marillier, 97, and the 27 May 1898 diary entry in Shannon's diary, British Library Add MS 58110); Shannon and Ricketts bought it for £150. The diary entry shows—from a fragment of a letter that was found with the drawing—that DGR had it photographed himself. It went as a gift to the Fitzwilliam Museum in 1937 (Ricketts and Shannon bequest).

This famous drawing gives an important statement of DGR's thoughts about the relation of pictorial forms of representation to the expression of ideas. Indeed, the picture amounts to a formal embodiment of its own thinking. Like The Girlhood of Mary Virgin and Ecce Ancilla Domini! , it is a strongly programmatic work.

DGR named the central idea of the picture “two houses opposite each other”. The phrase signifies primarily the opposed houses of worldliness and spirituality, here shown competing for the soul of Mary Magdalene. But DGR's unusual drawing forces the phrase to signify as well another, closely related opposition that concerns the practise of art. For DGR, Pre-Raphaelitism manifested an artistic contradiction that he sought to illustrate in this drawing.

His argument appears most dramatically as the aesthetic contradiction represented by the image of Christ. The conceptual (though not the emotional) center of the drawing is this image, which enters the picture as an iconic form. This form represents a key moment of pictorial contradiction. Abutting the right border of the picture, and wholly framed within the window space, the form will be seen at the level of the picture plane itself. But it occupies a fundamentally ambiguous position, and we are also invited to see the form more realistically, as a head in a window that opens into a room with other figures, or, finally, as an artistic image like a religious icon. In this last view the image of Christ is placed on the forward plane defined by the exterior wall of Simon's house, as if it were hung there like a picture. In the left and center areas of the drawing, however, Rossetti constructs an illusionistic space in standard perspectival terms. (Those are the terms inviting us to see Christ's head in a window, as part of the drawing's illusion of, and allusion to, “realistic” space.)

The drawing recalls Rossetti's admiration of primitive style and the alternative it offered to perspectivist rationality. Indeed, the latter becomes here the technical exponent of an art committed to “soulless self reflections of man's skill” ( St. Luke the Painter ). In practical terms Rossetti represents worldliness as space organized according to lines of perspective. This is the recessive area of street, procession, high road, and the distant river.

As in nearly all of Rossetti's work, the drawing is structured around different areas, each of which forms a center of attention in its own right. Perspective does not organize these pictorial areas; rather, it becomes itself a kind of figural event, a way of imagining and representing pictorial space. Rossetti thus makes space function as part of an argument about spiritual and aesthetic values. In the picture, spatial recession locates negative values whereas the icon of the head of Jesus is a positively charged gravity center. That stylistic opposition grounds the programmatic character of the drawing, which argues for a more catholic way of thinking about pictorial space than the Albertian tradition authorized in the academy.

DGR's argument by artistic form becomes further elaborated as we notice the other principal aesthetic contradiction in the drawing: between the meticulous realism at the level of small details, on one hand, and the symbolic detail that governs the picture at a higher scale of perceptual awareness. The fawn that “crops the vine”, in DGR's cunning description, brings the differential into sharp focus. The animal locates a moment of ornamental symbolism in the picture, yet its scale and fine draughtsmanship demand more attention than might be expected for such an accessory. This out-of-scale treatment of the pictorial elements is distinctively Pre-Raphaelite. To realize its significance more clearly one has only to look at DGR's early Poe and Faust drawings, where a more realistic drawing technique defines the separation of nature and supernature (in The Raven: Angel Footfalls , for example).

The sonnet that Rossetti wrote to accompany the picture replicates this opposition in the division between octave and sestet: the former is spoken by the Magdalene's worldly lover, calling her back; the latter by the Magdalene, who longs for Christ. Her desire receives a remarkable form of expression when she speaks of “my Bridegroom's face/ That draws me to him” (9-10). Playing on the word “draws,” Rossetti makes an arresting claim for the picture he has executed. The words lie open to various readings, but all assert the spiritual authority of a certain kind of art, and of this picture particularly.

DGR contemplated an oil picture on this subject as early as July 1853, and he began executing a drawing or drawings at that point. He may have made a sketch even earlier. In 1857 he was working assiduously at this elaborated drawing, which he was finishing for the semi-private Russell Street Pre-Raphaelite exhibition in June. But he kept working on the drawing through that year and the next, and he seems to have completed his work in 1859 (see Fredeman, Correspondence, 53.41, 58.16, 59.11, 59.15, 59.42).

This work has always been considered one of DGR's greatest pictures. Ruskin in particular admired it enormously— “magnificent to my mind, in every possible way” he wrote at the time to DGR ( Ruskin, Rossetti, Preraphaelitism, 183, 184). Its influence was considerable, most notably on Burne-Jones and Charles Ricketts.

DGR's description of the picture in his letter to Mrs. Clapburn (July 1865) defines the Christological symbology. It does not point out that this figurative material also operates at a second-order level, as a quasi-allegorical commentary or programmatic statement of DGR's ideas about art.

Grieve rightly says that “The elaboration of detail is Düreresque and the composition resembles that of Dürer's Nativity in the Small Passion. The bird pattern on the lover's cloak is taken from a plate showing a fourteenth-century North Italian costume in Bonnard's Costumes Historiques (1830 II. no 54)” (WMR, The Pre-Raphaelites, 284).

DGR associated the work with his contemporary-life picture Found , which he had conceived and begun around the same time as this work.

The scene is imaginary and symbolical, though the central event refers to the events narrated inLuke 7:36-50. Several details refer to other biblical passages. The fawn cropping the vine, a eucharistic figure of the soul, comes from Psalms 42:1. DGR himself said that the detail of the birds sharing “the beggar girl's dinner [gave] a kind of equivalent to Christ's words” in Mark 7:28 (from a July 1865 letter to Mrs. Clapburn) (see Surtees, A Catalogue Raisonné , vol. 1, 62-65). Here one inevitably recalls as wellMatthew 6:26. 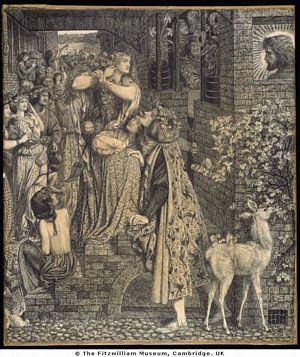 Subject: The Conversion of Mary Magdalene.
Copyright: © The Fitzwilliam Museum, University of Cambridge