Medium: oil
Dimensions: 35 x 34 in.
Frame: The frame was added to the picture in late 1873, when DGR did some repainting for Rae. It is “in two parts, an outer box of reeded black barred with gold and an inner flat decorated with a wavy frond pattern” (see The Pre-Raphaelites, Tate 1984 215).
Signature: monogram
Note: The monogram is inscribed at lower right.

Although DGR thought highly of this work, he did not make any replicas after this finished oil completed in 1866 and repainted in 1873. No studies have come down to us either. The painting is one of the most impressive in DGR's series of Venetian-inspired portraits of women.

For a full discussion see the general commentary for this work.

DGR began this picture in 1866 and was nearing completion on 27 September (see Doughty and Wahl, Letters vol. 2, 606). At that point he offered it to John Mitchell, but the picture was eventually bought by William Blackwell. In mid-1873, after the picture had been acquired by George Rae, DGR took it back for some repainting and finished the work in November (see Doughty and Wahl, Letters vol. 3, 1236). 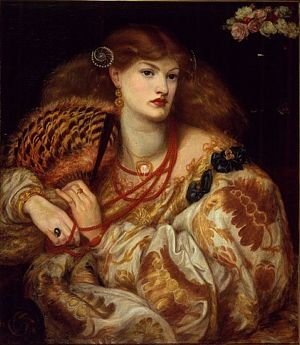 Description: DGR's description (27 September 1866): “I have a picture close on completion—one of my best I believe, and probably the most effective as a room decoration which I have ever painted. It is called Venus Veneta and represents a Venetian lady in a rich dress of white and gold,—in short, the Venetian ideal of female beauty” (see Doughty and Wahl, Letters vol. 2, 606).
Copyright: ©Tate, London 2002