This is one of several chalk drawings of this subject, including a preliminary study now in the Ashmolean, and a finished replica (private collection). The lack of poem in the upper right corner of this work indicates that it, like its counterpart at the Ashmolean, may have served as a study for a version in oil. While Surtees conjectures that this could be the “crayon replica” briefly mentioned in the appendix of Marillier's DGR: An Illustrated Memorial (no. 260), it seems more likely that he was referring to another, more complete copy which shares a similar provenance. The picture was considered a “mystery” when catalogued recently for a Christie's auction ( British Art on Paper, June 5, 2007) and its provenance remains disputed.

The drawing was heavily damaged and restored in 1962 by an unknown hand. According to Surtees, the modifications made then are most visible in the fall of the hair, and in the facial expression. ( A Catalogue Raisonné , vol. 1, 133). Recently found in a private collection, this work shows the restoration described by Surtees (as can be seen in this photograph taken in raking light), as well as the extensive water damage. 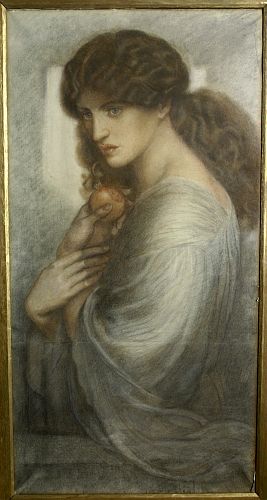