This picture, if completed, would have been part of a major project to interpret Dante's work and the general significance of his career as it was understood by DGR. The import of this project can be deduced from the three panels DGR planned for the triptych: the first would have been Giotto Painting the Portrait of Dante , which DGR in fact began; the second would have shown Dante as one of the Florentine magistrates presiding over the banishment of Cavalcanti; and the third was the present work.

WMR's explication of the significance of Giotto Painting the Portrait of Dante also reveals a great deal about his view of the meaning of the whole project (see DGR as Designer and Writer 16-17).

Only a set of studies for this work survives; they were executed ca. 1852 as preliminary to a painting DGR planned that would have formed the third panel of a triptych ( The Dante Triptych).

The picture relates most directly to the passage from Dante's Paradiso (XVII. 58-60) that DGR placed as an epigraph to his Dante at Verona . 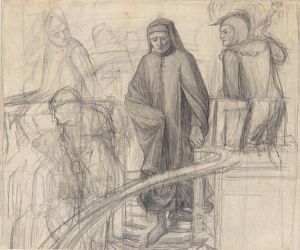