Note: The images of the bindings and endpapers are taken from copies of the books in the library of Jerome McGann.

This is one of DGR's most famous and influential binding designs. The first state of the design did not please DGR when he saw the initial copies of his 1870 book of poems, so he immediately set to work revising the design. (He was unhappy with the lettering on the spine, which appeared too broad for the size of the book.) The second edition of the book exhibits the revised design. The latter was used for the subsequent printings of the 1870 volume as well as for the so-called New Edition of DGR's Poems published in 1881. Except for the spine's lettering, the same design was also employed for DGR's Ballads and Sonnets , the companion volume of the latter also published in 1881. And when in 1886 WMR began to issue his series of two volume collected editions of his brother's works, he used the same binding design.

DGR integrated the binding with decorated floral endpapers. The design of these endpapers, according to WMR, was taken from some wallpaper that DGR's father Gabriele had brought with him to England when he left Italy. The best known state of these endpapers comes with the printed forms in dark blue and the background very light blue. But at least two other states are known: dark blue on white, and (in some of the de luxe copies) yellow on white. The dark blue on white appears in the copies printed early.

There were de luxe editions of DGR's volumes published in 1870 and 1881. These were issued in a larger octavo format on Whatman paper and were bound in light blue boards that were partially covered by the cream colored spine. The cover design for the de luxe edition of the 1881 Ballads and Sonnets volume is typical. 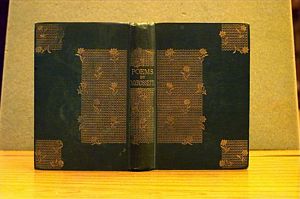