With this arresting photograph DGR began his brief but important collaborative involvement with early photography and photographers. The picture was taken in the summer of 1863, probably in June when Downey came to 16 Cheyne Walk to take various photographs that DGR wanted (see DGR's letters to Brown and George Boyce of 10 and 16 June 1863, Fredeman, Correspondence, 63. 64, 66).

The photograph may have influenced Whistler's celebrated painting Symphony in White No. 2. , which was finished in 1864. Whistler was a frequent visitor at Cheyne Walk during the summer months of 1863. Swinburne's splendid poem “Before a Mirror” was written to illustrate the Whistler picture. The latter, for its part, was inspired in its treatment of the color white by DGR's early experimental canvas Ecce Ancilla Domini! .

Even more than Whistler's painting, this photograph dramatizes the importance of the mirror in Victorian aesthetics. The mirror dramatizes the presence of multiple perspectives, something that DGR pursued with special vigor in his early work, where his study of Italian primitive art laid the groundwork for his lifelong anti-illusionist program. The mirror also blurred the borderline between nature and art, another key move in the symbolist aesthetics of the later nineteenth-century. The new photographic medium called special attention to the idea of the mirror precisely because it was at the time commonly denigrated as a purely reproductive procedure, and (in the minds of many) scarcely “art” at all.

As the photograph and the Whistler painting show, the nineteenth-century introduced an important variation of the well-established Renaissance convention of the “woman before a mirror”. In the latter, the woman stares directly into the mirror whereas in the nineteenth-century pictures the woman is reflected obliquely. The difference is highly significant, as one sees in the abstracted features that are a hallmark of these pictures. It is likely that the iconograph of the Lady of Shalott, who is obliged to assume an oblique relation to her mirror, may have had an influence of this nineteenth-century visual trope. Holman Hunt was doing studies as early as 1850 for his late oil The Lady of Shalott.

DGR's collaborative photographs—see his extraordinary series of photographs of Jane Morris—demonstrate his active pursuit of this medium as a form of artistic expression. Nearly all of the period's innovative photographers either knew and worked with DGR or greatly admired his work.

The picture was posed by DGR in his garden at Cheyne Walk in 1863. The photograph was taken by William Downey. 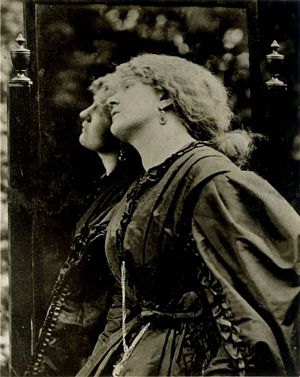