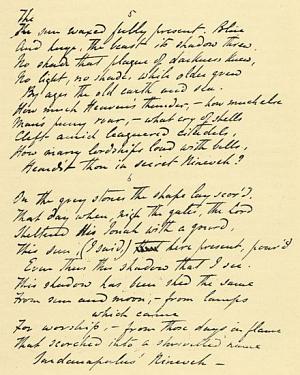 These stanzas were published in facsimile by Marillier. They represent a portion of DGR's early corrected manuscript of the poem (the present location of which is not known). Marillier said that Fairfax Murray showed him the manuscript and he added the following comment: “These are, first, a couple of verses, numbers 5 and 6, from the earliest original draft of ‘The Burden of Nineveh’, begun about 1850, and first printed in the Oxford and Cambridge Magazine in 1856 (pp. 771-775). The second specimen is from verse 7 of the same poem, a later interpolation on the opposite page of the manuscript book—or the blank portion of the same page, I forget which. The difference between the two styles is quite perceptible, and if the earlier portion dates from about 1850, the interpolated verse would belong to some succeeding year not later than 1856.” The interpolated stanza would have been scripted on the facing page of the manuscript, if DGR followed his usual transcription practice.