Cover: Red levant morocco binding by Riviere
Note on binding: gilt top edges, others untrimmed
Point: 8 point; 5.5 point leading
Lines per Page: 24
Note on Typography: DGR to WMR, 23 February 1870: “I have sent my proofs for correction and resetting (as I mean now to have only 24 lines in a page instead of 29” (see Fredeman, Correspondence 70.33). Doughty and Wahl, following T. J. Wise (Wise IV 129), say the type was now reset for the first edition proof. But Troxell (see “The Trial Books” 192) shows that the type “is the same, re-leaded but not re-set.” On 7 March DGR wrote to Swinburne saying his book is “now printed wider so as to make more pages” (Fredeman, Correspondence, 70.45). DGR hoped to have a book of approximately 300 pages.
Dimensions of Document: crown octavo, 18.6 cm x 12.2 cm 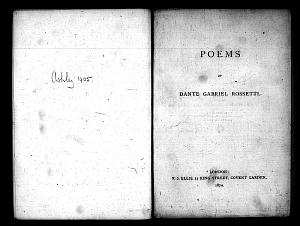 These are the proofs that DGR sent to Swinburne on 7 March 1870. They are the second state of the first issue of the proofs for the First Edition of the 1870 Poems . DGR began sending proofs to Swinburne on 28 November, after he had exhumed his book of MS poems from the grave of his dead wife and had these new poems added to the texts already in print.

The first form of the work-in-progress that Swinburne saw was the Second Trial Book. In the period between 28 November and 7 March DGR had numerous revisions sent to his friend for commentary and critique, and the two poets exchanged a series of letters in which they discussed in great detail various possible alterations. These letters, along with DGR's exchanges with his brother WMR, comprise an invaluable record of DGR at work, and his inclination to test his work against the reactions of others. For the exchanges see Fredeman, Correspondence 69.190 - 70.47 passim and Lang, Swinburne Letters, vol. 2, 42-108 passim.

Proof materials now scattered in various other depositories are probably from the proofs and revisions that DGR had sent to Swinburne. In the cases where we know the source of these materials, they are identified.

This proof carries revisions from an earlier state, and it underwent a major revision (resulting in a second issue) before it was ready to serve as printer's copy for the first edition (see Fredeman, Correspondence 70.43 - 70.82). The key additions made after this proof was pulled were the addition of “ The Wine of Circe” and “ The Stream's Secret,” and the rearrangement of several poems in the first section, especially the replacement of “ Troy Town” by “ The Blessed Damozel” as the opening poem of the volume. “ The House of Life” sequence changed slightly during the revision process, and the sonnets in particular were increased to fifty (there are forty-six in the sequence in this proof). The four additional sonnets were: “ The Love-Letter,” “ Barren Spring,” “ Love-Sweetness” and “ He and I.” The other major change was in the lineation, which went from 29 lines per page to 24 lines.

This is the second pre-publication state of the first issue of the 1870 Poems .