Cover: Original publisher's green cloth, gold stamped design
Endpapers: blue floral
Note on binding: Images of the spine, front and back covers, and endpapers are available.
Point: 8 point; 5.5 point leading
Font: roman
Lines per Page: 24
Columns: 1
Margin top: 2.7 cm
Margin bottom: 3.7 cm
Margin right: 2.6 cm
Margin left: 2 cm
Note on Typography: From February until the book was published in April DGR's letters to his publisher Ellis are preoccupied with the design of the endpapers and the binding, as well as other matters relating to the physical appearance of the book: see Fredeman, Correspondence 70.9-70.141 passim. DGR was unhappy with the design of the lettering on the spine of the first edition (see his letter to Ellis, 21 April 1870: Correspondence 70.111) but his complaint came too late for an alteration to be made in the first edition. The decision to air out the text by having only 24 lines per page (instead of 29, which is the way it had been printed to that point) was made in late February ( Correspondence 70.33). Running titles, consisting of the capitalized, italicized name of the poem or section followed by a period, are found in the following places in the 1870 Poems: in the table of contents (CONTENTS), on every poem in the Poems section longer than a single page (the name of the poem is the running head), on every page of the “House of Life” section (THE HOUSE OF LIFE), and in the “Sonnets for Pictures and other Sonnets” section (SONNETS FOR PICTURES or SONNETS).
Dimensions of Document: crown octavo. 18.5cm
Other Physical Features: There were 26 large paper copies printed on special paper. They were bound in half white boards with a paper label on the spine.

See the general bibliography for the 1870 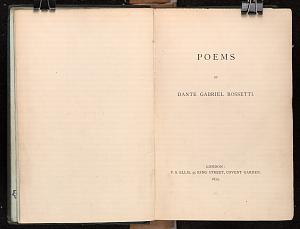 The 1870 volume of Poems was put together with immense care and deliberateness. Every aspect of the work, including all of its production features, was subjected to the most careful scrutiny. In fact, DGR not only wrote the book, he designed it, from cover to cover. He imagined it as a coherent statement of his life and purposes as a poet, which meant as a poet who was also, like Blake, a visual artist.

The book is organized with great care, as the elaborately worked and reworked proofs for the volume show. One might easily suggest various explanations for the ordering of the texts, but whatever interpretations were developed, the presence of a deliberated orderliness is unmistakeable. DGR was especially sensitive to the beginnings and the ends of the three parts of the book (in Part I, e.g., “The Blessed Damozel” clearly rhymes with “One Girl”). “The Monochord”, which closes the volume, is also plainly a text meant to carry ultimate significance. Finally, themes and image constellations recur across all three sections like leitmotiven.

DGR's 1870 collection includes work that dates back to 1847, as well as poems that he wrote for the volume when it was in its latest stages of the printing process. While that process was proceeding, he also heavily revised and corrected the poems, and used various friends—in particular his brother, William Bell Scott, and Swinburne—to help him decide about the changes in the texts. These changes were of three kinds: corrections to individual poems (including revisions, additions, and deletions); removal and addition of poems; and rearrangement of the poems within the volume. (Swinburne's letters to DGR, and the latter's correspondence at the same time, comprise an invaluable set of critical commentaries on the book and its individual poems: for Swinburne see Lang, Swinburne, LettersII. 57-106 passim, and for DGR see Fredeman, Correspondence 69.165-70.96.

The idea for such a volume developed in the autumn of 1868 when DGR visited Alice Boyd and William Bell Scott at Penkill Castle. This move's first most tangible result was DGR's publication of a sixteen sonnet forecast of “The House of Life” sonnet sequence in The Fortnightly Review (March 1869). After that publication DGR continued to write, to gather together some of his early work, and to put together a collection that would represent his achievement as a poet. By the summer of 1869 he had decided to set this body of his poetry in type, though not for publication. Thus began the incredibly complex process of typesetting proofs and Trial Books which DGR used as his vehicle for revising his poems and experimenting with the form of the book that would eventually become the 1870 Poems, published in late April 1870.

The revision process stretched from the printing of the first set of proofs connected with the 1870 Poems (the Penkill Proofs, 18 August 1869) to mid-April 1870, just before the book was published.

There is a copy of the first edition that is bound in plain green covers, without the famous decorative design. This was a review copy DGR sent to Richard Garnett. It is inscribed “Olivia N Garnett/from Richard Garnett/May. 1870”. It is located in the library of Baylor University.

At least seventeen of the poems printed in this volume qualify as “double works of art” for which the corresponding pictorial element is a work by DGR. In addition, there are five other “Sonnets for Pictures” that DGR wrote to accompany paintings executed by other artists. The latter group constitutes a body of work that DGR intends to represent a broad historical range of painting that extends from the early Renaissance to DGR's contemporary scene.

A number of the most notable poems in the volume deal explicitly with contemporary issues, like “Jenny”, “The Burden of Nineveh”, “On Refusal of Aid Between Nations”. But the main contemporary thrust of the book is along cultural and aesthetic lines. The social issue that most concerns DGR is the current state of British art and poetry. His obsession with this matter is scarcely less intense than his master, William Blake. Where the latter's emotional temper in this area tended to be quite volatile, however, DGR's was brooding.

The chief literary presence in this book is without question Dante—most especially the Dante of the Vita Nuova, although DGR knew and drew upon all of his work. Beyond that, the entire tradition of courtly love and troubadour verse exerts a clear influence across the volume: one notes in particular Dante's contemporaries, Petrarch, Sidney, Shakespeare, the English metaphysicals, and finally the Della Cruscans of the late eighteenth-century and their inheritors (especially Shelley, Keats, and Tennyson). Oddly, Blake does not figure prominently in the book, even though he was in certain clear ways DGR's English master and mentor. Finally, Poe and Browning figure in prominent ways.

Immediately after the volume was published DGR raised the possibility with his publisher Ellis of reissuing his book of translations The Early Italian Poets (1861) (see Fredeman, Correspondence 70.129-70.141). The thought underscores the close and important relation that DGR's translation work bears to his original poetry. The relation is manifest throughout the 1870 Poems, although only the “Three Translations from Villon” make the point explicit.