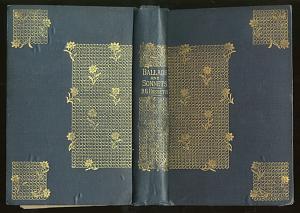 The Ballads and Sonnets volume began as part of DGR's project to bring out a new and expanded edition of his 1870 Poems , which had gone out of print in 1878. Although the idea for a new edition was being explicitly broached as early as February 1880, the book became a practical possibility sometime around September 1880, when DGR had finished composing “ The White Ship” (see Bryson, DGR and Jane Morris, 155). DGR was writing a good deal of new poetry by the fall, and in November a publication plan was being formulated by DGR's publisher Ellis, who suggested putting “the old and the new together” in one volume. DGR agreed. The new volume entered its final planning stage in December (see WMR's Unpublished Diary, 226).

DGR accomplished a number of works at this time — “ The King's Tragedy” was begun in December, “ Rose Mary” was finished in February, 1881 and “ The White Ship” in April, and “ The House of Life” sequence was being completely recast. In December he saw that “This series now consists of 100 Sonnets (though I omit several of the M. S. ones) and forms 2 Parts viz Part I Youth and Change Part II Change and Fate[.] I shall have nearly 50 Sonnets besides the House of Life ones” (letter to Jane Morris, 13 December 1880: Bryson, 167-168). Indeed, all these new sonnets and the new ballads clearly dictated the title of the book that finally emerged.

At first DGR planned a single new volume, and in December 1880 this was still his plan; the book was to be called Poems Old and New (letter to Mrs. Morris, 17 December: Fredeman, Correspondence 80.386). The decision to produce two new volumes, one comprising (for the most part) new poetry, the other older work, was made in January 1881 (see WMR's Unpublished Diary, 232). DGR's greatest attention was given to the new work, the Ballads and Sonnets volume, a fact that shaped the schedule of publication for both books. DGR's customary meticulousness dragged out the production process, which was further delayed by Whittingham's slow delivery of the proofs. And other obstacles arose. First was Jane Morris's apprehensions about the personal character of “ The House of Life” sequence, second the publisher's desire — after so many delays — to put off publishing even further, until a better commercial moment should arrive. This was judged to be early fall, so while Ballads and Sonnets was ready for publication by the end of June, it did not appear until late October.

The composition of the book involves the history of the composition of various individual pieces in the book, and most importantly the three long ballads as well as the new version of “ The House of Life”. The process extended over the better part of a year, from the late summer of 1880 to mid-summer 1881. An important event was the decision to include the whole of “ The House of Life” in this volume, rather than in the companion volume of Poems. A New Edition , where he had at first intended to place the sequence.

As usual with DGR, most of the revision process took place at the proof stage, which commenced for the Ballads and Sonnets in early April 1881 and continued into August. The cancels were made in late July and early August (see Fredeman, Correspondence 81.305, 306, 342, 351).

Of first importance here is the identity of the printer: Charles Whittingham, and the Chiswick Press. In making this choice DGR was returning to the printer he used for his first book, The Early Italian Poets , and to a printer whose reputation for careful work was very high. The companion volume of 1881, the new Poems , was being printed by Strangeways, who was the printer for the 1870 volume. In thus dividing the work, Ellis and DGR clearly hoped to expedite the printing process. Events conspired against their plans, however.

As with all of his books, DGR was much concerned with every aspect of the physical appearance of the book. An interesting letter to Ellis (see Fredeman, Correspondence 81.126) refers to Swinburne's two recent (1880) volumes, Studies in Song and Songs of the Springtides, whose page format designs DGR wanted to follow. The typographical character of the Ballads and Sonnets volume as it finally appeared is unusual. Most significant, the two broad parts of the book — the ballads on one hand, and the sonnets on the other — are treated very differently. The page for the ballads permits only 17 lines of text, whereas the page for the sonnets reverts to the format of the 1870 Poems and carries 24 lines of text. As it turns out, this typographical double-mindedness results in a rather awkward appearance in the book as a whole — in sharp contrast to both the 1870 and the 1881 Poems volumes, which are strikingly beautiful and coherent as physical objects.

As to the actual printing process, DGR's arrangement with his publisher called for at least three and sometimes four sets of initial proofs for each signature. One or sometimes two were kept in house and at least two were sent to DGR, who would send a corrected set back to the printer, keeping a corrected set with himself. Two copies of revise proofs would then be sent back to DGR with one set kept in house, and the revision process would proceed in that way through further revises until DGR was satisfied with the state of the text. The printing process began on 5 April and was not finally complete until 7 June.

DGR's brother William Michael was much involved with the revision of the book. DGR regularly sent copies of his first author's proofs to his brother for comments and suggestions. In addition, on 17 May DGR told his publisher to print off a complete proof copy of the book and send it to his brother for further inspection, and on 21 May he made the same request that a copy be sent to Theodore Watts.

The most intense set of revisions came at two periods. The first was between 25 April and 3 May, when the initial signatures for “ The House of Life” arrived to DGR (signatures M and N). These revisions involved a major redesign of the page plus some of DGR's characteristic moves to shift the position of different sonnets. The second period dealt with late alterations to “ The King's Tragedy” (signatures K and L), for which revises were pulled intermittently between 15 May and 7 June. These changes came about largely because of questions Watts raised about the poem around 20 May. DGR responded to these over the next few days by writing new material for the poem and revising various passages.

The book sold very well after its publication on 17 October (the price was 12s.). By 25 October 1000 copies had been sold (but see Fredeman, Correspondence 81.449 where the number is put at 1250). Ellis ordered another 1000 copies which were printed in November, 500 issued as the second edition (dated 1881), 500 as the third (dated 1882). From this print run sheets for 250 copies were sent to the American publisher Roberts Brothers (who issued a second edition of 1000 copies of their own in 1882). In March 1882 Ellis was preparing another (the fourth) edition, which was published sometime after 10 March.

The volume has cancels for the following pages: Dedication; The House of Life title page; 185-86.

The initial sales of the book, as well as the early reviews, testify to its contemporary success (see Ghose, DGR and Contemporary Criticism (1849-1882)).

There is a sharp division of opinion about the quality of the new (long) ballads, and this difference fairly epitomizes a difference between contemporary and later views of the poet's work in general. Twentieth-century readers tend to see these later ballads as a falling off from DGR's earlier work, whereas most of his contemporaries received them with great favor.

This culminant work of his literary career is appropriately dominated by DGR's two favorite generic forms, the ballad and the sonnet. It also contains the latest version of his masterwork “ The House of Life” that he authorized. As with the 1870 volume, DGR looked upon his poetry as artistic work unprostituted by those commercial concerns that he saw dominating his work as a painter.

DGR's sister was especially pleased by the ballad form because it avoided the painful aspects of her brother's more personal work. So she urged him to write more of them. (WMR, Family Letters, 89) And so he did, partly out of admiration for Tennyson's new volume, Ballads and Other Poems, and partly out of a desire to make a broader appeal.

The book concentrates its explicit autobiographical focus in “ The House of Life” sequence, and in doing so it emphasizes the strongly disjunctive character of the volume. It is as if DGR's work, which is nothing if it isn't all of a piece (even obsessively so), were here being arbitrarily compartmentalized. The effort to de-personalize the appearance of his work is carried to an extreme, even to the presentation of “ The House of Life” sequence. The story of that effort is epitomized in the story of the delay of the book's publication. DGR himself was worried about his sonnets “attacked as being personal” (Doughty and Wahl, Letters, IV 2507), and he sought Jane Morris's view of the matter, since she figured so intimately in that work. As William Fredeman has observed, there can be no doubt that by early July Jane Morris had conveyed to DGR “some anxious response. . .to the proofs” (Lewis, 211) of the book she had read. As a result, DGR removed the final sentence from the introductory prose advertisement for “ The House of Life” sequence. The sentence had left it open whether a reader should take the story told in the sonnets as “fact or thought” of the poet's.

So by a kind of paradox, this volume and its companion Poems. A New Edition achieve a strange autobiographical force precisely by the poet's efforts to remove the personal elements from his latest work. This book in particular seems marked by various kinds of disharmonies, displacements, and disjunctions at every level. As such, the poet's fractured psychic state seems well represented by his book.