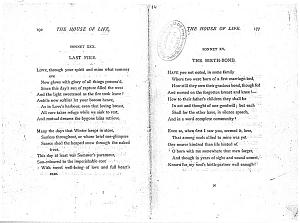 This is a complete duplicate copy (dated 28 April 1881) of the first revise of Signature N of the Ballads and Sonnets volume. Like the other copy of this first revise, this copy has DGR's textual corrections, but unlike the latter, it does not carry his corrrections to some of the titles of the sonnets. In the first proofs for Signatures M and N, the sonnets ran over to the versos so that on Signature M only seven sonnets plus the Introductory sonnet were first printed, and on Signature N only eight sonnets were printed. As DGR's note to the printer on page 163 of the first author's proof for Signature M in the Delaware Museum Library shows, both of these signatures were directed for major redesign, with one sonnet to be printed on each page. Beginning with this first revise, all subsequent printings put each sonnet on a separate page, with no run-ons to the versos.

Another major change was made in early May, as the proofs pulled on 6 May show. DGR called for a shift in the sequence-position that involved four of the sonnets (see DGR's notes to the printer on pages 183 and 191 of copy 1 of the fourth revise).

This is the only signature that contains a cancel, which DGR called for on 3 August and which was made by the printer on 7 August. The proof for this cancel leaf is among the Delaware Museum's large collection of proofs.