Geoffrey Chaucer Reading the “Legend of Custance” to Edward III and his Court, at the Palace of Sheen, on the Anniversary of the Black Prince's Forty-fifth Birthday

The original study for this monumental work, now titled The Seeds and Fruits of English Poetry, was a triptych depicting Milton, Spenser and Shakespeare in the left panel, and Byron, Pope and Burns in the right. In the finished work only the center panel remained, focusing on Geoffrey Chaucer reading to the court of Edward III with the Black Prince standing at his left. In his Pre-Raphaelitism , William Holman Hunt illustrates the original tripartite sketch, now in the Ashmolean Museum, Oxford. 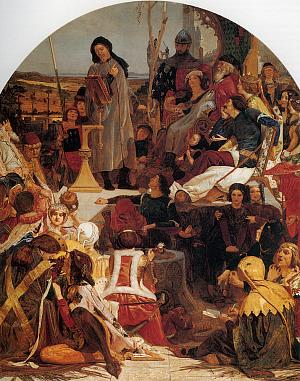