Production Date: 1865
Patron: C.P. Mathews
Date Commissioned: July 1867
Original Cost: £1575
Note: Mathews, the brewer of Ind Coope & Co., originally commissioned the work as an oil painting for the above amount but later requested a change of subject because of the severed head of Medusa which he disliked.

That DGR wanted all his life to paint this subject seems important, as the remarkable brief lyric he wrote to accompany the picture emphasizes. The main subject is clearly art and its function in the world, but certain details, peculiarly Rossettian, complicate the issues involved. First is the fact (according to DGR, and following Lempriére) that the Gorgon's head saved Andromeda's life; second is the idea (entirely DGR's) that Andromeda desired to see the head of the monstrous woman slain by Perseus. These matters are made explicit in the lyric. The picture focuses on another matter: the deep equivalence between the Gorgon's head and Andromeda's. To decode these relations as a map of misogynist fears seems important, if perhaps obvious. It is a necessary first step for dealing with a larger set of problems. To the degree that the equivocal figure of woman represents for DGR a spiritual and aesthetic ideal, this picture implicitly argues that society and its cultural supports are founded on dark contradictions. Worse, those who have been licensed to represent reality—artists—operate in a conscious bad faith, according to DGR's representation of things. And the exposure of the full truth is figurally assigned to Andromeda, who wants to know what Perseus knows.

In simple gender terms this situation can and should be read as an argument for equal education for women. But it also suggests that DGR's work is an effort to imagine a new kind or level of artistic practice—one that would not conceal its own most threatening and even (self)destructive understandings. Always the subject matter is veiled and distanced, and thereby acculturated; but according to DGR's allegorical argument here, one might at least imagine an artistic practice that acknowledged its own concealments at the surface of its work.

The story of the commission of this picture by the brewer C. P. Matthews, told by WMR (see WMR, DGR as Designer and Writer 58), realizes in factive form the problem that DGR's work meant to engage. Having commissioned the picture, Mathews reneged when he saw DGR's finished drawing, because he found the image of the severed head repellent.

This is a study done in 1865 for the oil painting that DGR planned to execute but never did. In 1867 C. P. Mathews commissioned an oil picture for £1575 that was never made but the agreement was dropped because Matthews disliked Medusa's severed head. DGR made a more finished crayon drawing that was seen and much admired by Sir Frederick Burton in 1868; this may be the picture reproduced in Marillier, or perhaps the chalk drawing in the Bradford City Art Gallery.

The symbolism of the picture, highly idiosyncratic, is explicated in DGR's accompanying poem. The main subject is art, which is able to represent “forbidden” subjects in “shadow” or mirrored forms that would be intolerable if contemplated directly. The idea that Andromeda “hankered each day to see the Gorgon's head” is an invention of DGR.

As in many other cases, the poem DGR wrote for his picture explicates the subject in conceptual terms. Both poem and picture relate closely to DGR's other treatment of the Perseus legend: his pair of sonnets “For Ruggiero and Angelica (by Ingres) .” The latter does not suggest that Perseus overcame the monster by using the Gorgon's head, which is asserted in Aspecta Medusa (and for which DGR used Lemprieré as his authority). 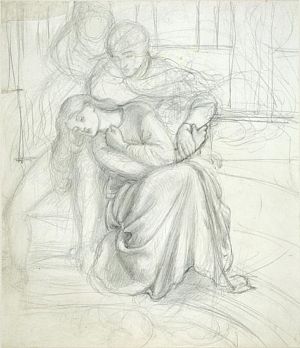