DGR's friend Theodore Watts–Dunton suggests that he was (by chance) responsible for the development of this painting out of the chalk drawing of Jane Morris that DGR made in 1875. He told DGR that the drawing “expressed exactly the idea of one of the Oriental Venuses—(Al Husa, perhaps—or else the Syrian Venus) who, growing less and less mystical as she travelled, became the Aphrodite of Western poetry.” Watts goes on to say that DGR made two efforts at the painting because he thought the British public might not be able to appreciate his “experiments in flesh-painting” in which “the corporeal part of man seemed more and more to be the symbol of the spiritual” (see Watts–Dunton's essay on DGR in The Nineteenth Century, March 1883, pages 412-413).

Faxon acutely notes the effectiveness of DGR's glazing of the picture, a technique he developed after studying Titian's remarkable use of “successive glazes to create rich, glowing color” (Faxon 193). Another important technical aspect of the work was pointed out by Watts–Dunton: that in this picture and a number of his other late works DGR followed a “method . . . of laying in his heads in genuine ‘ultramarine’ and white . . . to give . . . his afterpainting that dreamy suggestiveness to the flesh which his mysterious conceptions required” (“The Truth about Rossetti,” 412).

Alastair Grieve compares the attendant figures in this painting with Blake's angels in several of his engravings for the Book of Job. Perhaps even more notable is the striking echo of traditional representations of the enthroned Madonna. The painting also recalls DGR's earlier work Dantis Amor , in which the figure of Love (gendered male) stands between the sun and the moon.

The fact that Jane Morris was the model for Venus (and May Morris for the left attendant figure) is surely relevant to an appreciation of the picture. So is the fact that one of DGR's studies for the painting, the ink drawing originally owned by Clarence Fry, formed part of DGR's Perlascura series, which he projected as an elaborate act of homage to Mrs. Morris. 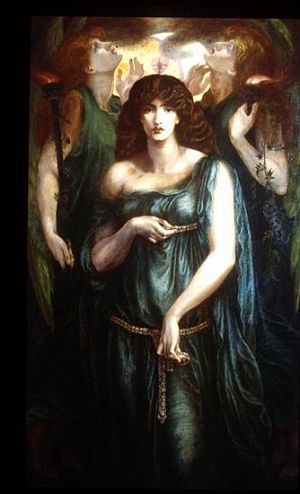