Document Title: A Last Confession
Author: DGR
Date of composition: 1869 (Manuscript copied in October 1869 from an earlier copy made before 1862)
Collation: 24 leaves, mostly uniform, except leaves 13-14 are a separate insert manuscript and leaf 15 is a corrected proof sheet with text of the intercalated poem “Madonna” .
Scribe: DGR
Corrector: DGR 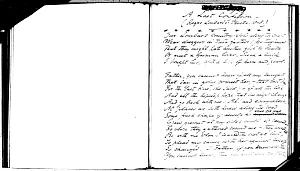 This manuscript represents at least two levels of construction. Initially it was made by DGR as a copy of the text of the poem that was exhumed from his wife's grave in October 1869. This is the text as it stood (initially) on the rectos. To that text, however, DGR made a series of major revisions—cancellations, corrections, and extensive additions. These regularly appear on the versos, though some are on the rectos as well.

Page 15r is especially interesting because it contains a printed text of the first 24 lines of the Italian song “Madonna” (initially printed, as the text here shows, under its early title “Madonna Consolata”). The page bears the printed page numbers 91-92, indicating that it originally formed part of the Penkill Proofs (which are missing those pages).

First printed in the Exhumation Proofs in October 1869.