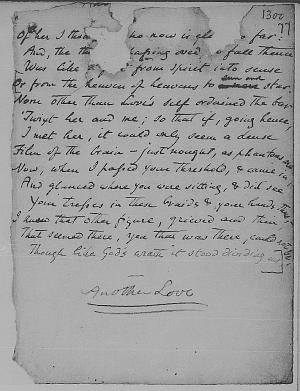 This fascinating document is a leaf from the book of poems that DGR buried in his wife's coffin. E. G. Millar, in his unpublished (1961) Handlist of Manuscript Material in the Ashley Library , states that it “is probably one of the 3 surviving leaves from the book of poems buried by Rossetti in his wife's grave” (157). These judgments are responding to the physical condition of the manuscript leaf, which exhibits two rough edged holes toward the top of the leaf showing where the paper, for some reason, has rotted away. DGR himself told Ford Madox Brown in a letter written right after the book had been recovered (13 October 1869) that the volume was mutilated in just that way, with“a great hole right through all the leaves of Jenny” (see Fredeman, Correspondence, 69.182).

Another leaf from the coffined book is in the Houghton Library (Harvard U.), a cancelled fair copy of “Praise and Prayer”. T. J. Wise said that he owned a third, but it is unlcear what manuscript this is. Perhaps it was the copy (in four leaves) of “Wellington's Funeral”, now in the Beinecke Library, (Yale University). These four pages were also part of the book DGR placed in his wife's coffin.

This is a later copy made by DGR, perhaps in 1862. Two other copies of the sonnet survive: the earliest copy, made in 1848, and a fair copy made from this copy.