Prints of this kind began in the 1790s as loose sheets of figures taken from the popular theatre of the day and illustrating the key actors and characters (for example, Robert Dighton's 1799 portrait of John Kemble playing the title role in Pizarro). As such they were a kind of souvenir. Soon, however, enterprising publishers began issuing sheets that had figures and theatrical scenes designed to be cut out and made part of a toy theatre that children could construct at home. These toy theatres were immensely popular throughout the 19th century, and it is clear (see WMR and Marillier) that DGR played with them and used the engravings as models for his juvenile drawing.

The images were available either colored (as in Hodgson's Characters in the Infernal Secret (1822) or uncolored (as in J.K. Green's 1847 Characters and Scenes in the Flying Dutchman or the Phantom Ship ). 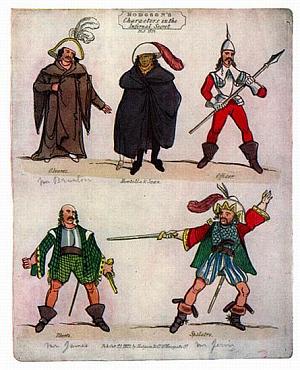