Production Date: 1874
Exhibition History: B.F.A.C., 1883 (no.87); Tate 1911 (no.2440)
Patron: The Hon. William and Mrs. Cowper–Temple
Original Cost: gift
Note: DGR gave the picture to the Cowper-Temples in gratitude for their hospitality when he visited them at Broadlands in August 1876. According to Charles Howell, the picture was originally offered to him.

This unfinished work is extremely striking because of the uniform treatment of the gold background and the gold drapery of the damozel. The modelled head and hair appear to float not so much on as in this flat and shallow gold surface. The effect is visually contradictory, as if DGR had introduced a realistic and even voluptuous image into the kind of space typical of iconic and even byzantine work.

The picture was begun as an early version of The Blessed Damozel, but DGR cut it down “to a small single head picture”, as he told his studio assistant Treffry Dunn, after he had begun the larger picture again (quoted in Surtees, vol. 1, 142). DGR recovered the picture (probably in 1876, when he gave the picture to the Cowper-Temples) in order to have its background completely gilded, as it in fact comes down to us. Both the gold background and the lilies are later additions, and the outer edges of the hair were also reworked when the gilding was added. In reworking the picture DGR left the damozel's gold dress unfinished. Nonetheless, since he gave the picture as a present to the Cowper-Temples, DGR must have thought it completed.

The picture not only forms part of the sequence of Blessed Damozel paintings and drawings, but relates as well to the three-quarter length work known as Sancta Lilias . 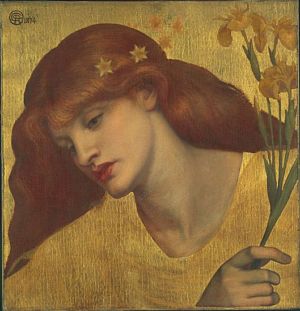 Description: An iconic head of the damozel who is holding irises in her right hand; her head, looking downward to the left, is set against a gold background uniform with the gold of the area that would have had her drapery.
Subject: The emparadised woman
Copyright: ©Tate Gallery, London 2001