Many regard this binding design as DGR's supreme achievement in this line of his work. It is the third in a sequence that began with the fairly elaborated symbolical design he made for his brother's translation of Dante's Divine Comedy: Hell (1865), a rondel-dominated design that he continued in a more severe style in the binding design for Swinburne's Atalanta in Calydon (1865). In Swinburne's 1871 book DGR “adapted the designs he had made for the contemporary frame of Beata Beatrix . On the front and back of the book are three roundels, each about the size of an old penny, decorated with stars, the crescent moon and the rising sun. The roundel with the last device is repeated on the spine at the same level thus once again linking the spine with the front and back. The colour of the cloth is the same as that of his own Poems and this must be seen as part of Rossetti's attempt to link together the publications of his friends into a cohesive group under one publisher.” (Grieve,“Applied Art 2”, 83). The emblematic rondels recall as well DGR's own work, in particular the early picture Dantis Amor , and in this respect they indicate that DGR is “reading” his friend's book—whose explicit subject is a contemporary political one—in a highly idealized way. That reading, needless to say, corresponds closely to Swinburne's own approach to his subject. 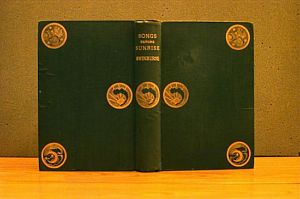