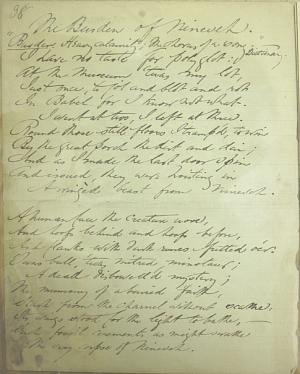 This interesting manuscript dates from 1869, at the beginning of the proof process that would culminate in the publication of DGR's 1870 volume of poems. The text in this manuscript represents the opening of the poem as it was first printed in the 1856 The Oxford and Cambridge Magazine . This text, however, was never set in type for any of the proof states of the 1870 book DGR was preparing for publication, not even in the initial so-called Penkill Proofs. DGR's note to the printer, which is part of this manuscript, suggests therefore that he changed his mind very soon after making this copy and revised the poem along the lines we now recognize as the received text.

The manuscript also suggests that this must have been the first page of a complete manuscript of the poem (now no longer extant). DGR's letters of August and early September 1869 to the printer Strangeways indicate that he had a number of poems set in galley proofs—what he called slip proofs—in July and August. A few fragments of these proofs survive, most notably the galley proofs for “Sister Helen”.

This manuscript and note to the printer Strangeways dates from the week of 8 August 1869. DGR writes that he wants his proofs by Friday, which would have been 13 August. He did not leave for Scotland until Tuesday, 17 August.