Document Title: Art and Poetry: Being Thoughts towards Nature Conducted Principally by Artists
Editor: William Michael Rossetti
Publisher: Aylott & Jones
Printer: G.F. Tupper
City of publication: London
Date of publication: 1850 April 30
Edition: 1
Pagination: [i-iv], 145-192 + 1.
Volume: 1
Issue: 4
Note on Publication: The title of the periodical in this and the previous issue was changed from the original title of The Germ. Thoughts towards Nature in Poetry, Literature, and Art. Each of the four published issues carries an engraving as frontispiece. 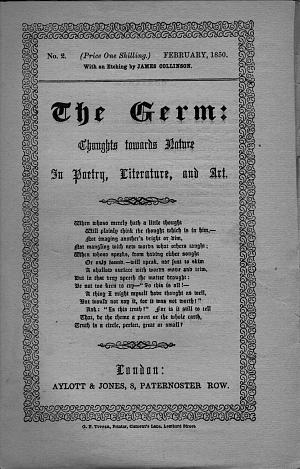 This is the British Library copy of the fourth and last issue of The Germ, the periodical launched by DGR and some friends in 1850 for disseminating the work and ideas of the initial Pre-Raphaelite circle. Only four numbers were published (January, February, March, and May, 1850).

The most useful commentary on the periodical is still the 1901 Preface written by WMR for the facsimile reprint of The Germ.

The first number appeared in 1 January 1850 with Holman Hunt's etching (700 copies printed; 50 had etchings on India paper). Only 70 were sold. The second issue appeared on 31 January (500 copies printed, 40 sold by 9 February) and with a James Collinson engraving. Number 3 appeared on 31 March with Ford Madox Brown's engraving, and the last number, with Walter Deverell's engraving, on 30 April. Print runs for issues 3 and 4 are uncertain, and apparently only 106 copies of number 4 were sold). The poor sales forced the journal to close down. Most of the expenses for the financial failure of the magazine were born by George Tupper.

After the fame of the PRB was established, The Germ was reprinted first by Thomas Mosher (1898: Portland, Maine) and again as a close facsimile in 1901 with an introductory “ Preface” by William Michael Rossetti giving historical and bibliographical particulars about the magazine. A recent reprint was put out by the Ashmolean Museum, Oxford (1992), with a Preface by Andrea Rose.

Each of the four issues began with an etching, a device that clearly established the artistic focus of the journal. The gothic types that were used for the cover sheets (which also served as title pages) and for the printed texts also contributed to the tone if not the arguments of the work. These types seem reminiscent of the Puseyite or Tractarian movement and locate the work's spiritual inspiration in an earlier, medieval world.