Note: Transcribed from a facsimile edition at Alderman Library at the University of Virginia.
Cover image and advertisements courtesy of Huntington Library, San Marino, CA 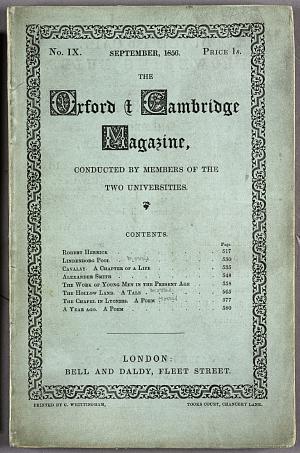 The ninth issue of The Oxford and Cambridge Magazine contains William Wright’s only contribution, an essay on Robert Herrick, as well as an essay by Cormell Price on young men in the nineteenth century and one on Alexander Smith, by William Fulford. The issue also contains the first chapters of Morris’s The Hollow Land and Fulford’s Cavalay. Morris also has another story in this issue, and he and Fulford each have a poem published here.

Fulford continued his editorial duties through the Magazine’s last issue, but he grew more and more embittered about the lack of submissions from the rest of the brotherhood. He wrote in September, “Topsy [Morris] and I are the only ones of the set that write at all regularly. Ted [Burne-Jones] won’t write” (Mackail 90).