Medium: oil and gold and silver leaf on mahogany panel
Technique: Raked lighting shows that the figure of Love was laid in last, over the sun burst and field of stars. Love's dress is gold with brown modelling.
Dimensions: 29 1/2 x 32 in.
Frame: Designed by DGR; gold flats.

Current Location: Tate Britain
Catalog Number: 3532
Archival History: William Morris first owned this picture. It went back to DGR's studio in 1865 and was bought by Ernest Gambart. In 1920 the picture was given to the Tate by F. Treharne James.

This picture, which was not completed, was to have been the central panel of three for a cabinet at William Morris's Red House, Bexley Heath. The cabinet is still there, but some time before August 1863, the two finished panels were removed and made into a diptych with a narrow central separator where a schematic form of the figure of Love (as depicted in this work) appears. This two-panel work is The Salutation of Beatrice, now in Ottawa.

DGR sold this unfinished picture to the dealer Ernest Gambart, apparently in 1865. On August 10, 1863 (see Fredeman, Letters, 63.83) he wrote to Gambart describing the pictures in the diptych, and including the more schematic picture of the figure of Love painted on the frame between the two main pictures.

The picture is a fine instance of DGR's understanding of how to exploit the picture plane for maximum expressive effect. The painting lacks entirely any sense of depth. As a consequence, all of the pictorial elements possess a kind of absolute quality, as if they stood in some realm apart from the normal regions of time and space. The self-conscious archaism of this style shows that the absolute world here is an artistic world, a world created by desire and imagination. The picture is thus an implicit argument for the importance of visionary art, as well as an explicit instance of a visionary manner.

The title has a double significance, with the genitive case signalling both Dante's love (for Beatrice, for Love, for God) and Rossetti's (for Dante as the emblem of visionary art, and for Love as idea and experience). DGR re-imagines Dante's love-ideal in a secondary devotional act that means to recover Dante's spiritual values for a more secular world. The recovery necessarily involves as well a translation of those values into quotidian—more specifically, into artistic—terms.

In a letter to William Bell Scott, dated Friday [7 December 1860], DGR said he was going to Morris's house at Upton to paint this picture (see Fredeman, Letters, 60.55). He evidently made progress on the work but did not finish it. The picture was left with the Morrises, awaiting completion, but eventually it came back to DGR's studio, where it was further advanced, though not finished. Grieve (see Tate 1984, The Pre-Raphaelites, 179) believes much of the later work on the picture was not done by DGR, but by an assistant.

The picture is a symbolistic representation of the death of Beatrice and the meaning of that death. As the central panel of the projected triptych, that death stood between the two salutations given to Dante by Beatrice, the one in the Vita Nuova (see chapter III), the other in the Purgatorio Canto XXX. Grieve says that the picture, “represents the essential truth of both the Vita Nuova and the Divina Commedia, that Love is the generating force of the universe” (see Tate 1984, 179). In his left hand the figure of Love holds a bow and arrow, in his right an (unfinished) sundial; the latter would have pointed to the ninth hour, the hour of Christ's and of Beatrice's death alike. The time is represented in the versions of this picture that are complete. Ainsworth says that the picture specifically illustrates the Vita Nuova, chapter XXVIII, “when the Lord God of justice called my most gracious lady unto Himself” (see Ainsworth, DGR's ‘Dantis Amor’, 72).

Reproductions hardly convey the subtle uses of color in this remarkable picture. The head of Christ rays out in dull silver leaf, which is echoed in the silvered moon below (around the head of Beatrice) and in the field of stars where the smaller ones are in the same dull silver. The large stars are in gold, which echo to the outer, thinner (tripled) reaches of the sun rays.

The picture is a symbolistic expression of the centrality of Love as DGR found it articulated in Dante. The key text here is the Vita Nuova, as the inscription surrounding Christ's head indicates (“qui est per omnia saecula benedictus”); these are the concluding lines of Dante's spiritual autobiography. In its completed form, as the finished drawing at Birmingham shows, Beatrice's head was to have been circled with the immediately preceding words from Dante's autobiography: “quella beata Beatrice che mira continualmente nella faccia di colui”. 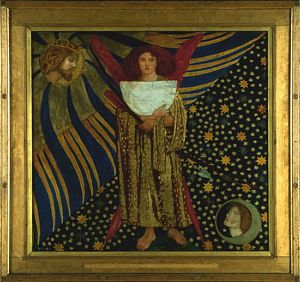 Description: The central figure in this picture is Love, who is holding what would have been a sundial (if the picture had been completed). He stands against a decorative background divided along a diagonal running from upper right to lower left. In the upper left quadrant is the head of Christ, figured as the sun, looking down across a heavily stylized field of sun rays that emanate from the circle surrounding his head. His gaze is directed toward the figure of Beatrice, whose face is inscribed in a crescent moon in the lower right quadrant against a background of stars.
Copyright: ©Tate Gallery, London 2001


QUI EST PER OMNIA SAECULA BENEDICTUS
Note: The inscription circles the head of Christ in the upper left corner.