Critics often date a change in DGR's painting style from this work, although in fact the change is discernible in work beginning in 1859. The shift is toward a more sumptuous surface, and a turn to Venetian models. A notable increase in decorative accessories locates important shifts in general conception, in the deployment of color, and in the overall composition. These changes were deplorable to Ruskin, and his strictures on this painting eventually caused a rupture in the relations between the two.

The painting epitomizes the ambiguities that invest so many of the highly decorative female portraits that DGR produced, from Bocca Baciata , The Blue Bower , Fair Rosamond , The Beloved , and Monna Vanna to a late work like Astarte Syriaca . Ruskin's comment, that “certain conditions of non-sentiment . . . underlie all you are doing now,” goes to the heart of the matter, for these female figures radiate at once great erotic power, great worldliness, and great indifference. They seem as well, perhaps paradoxically, great spiritual presences, although by no means morally sympathetic. William Sharp's descriptive analysis of the present painting is much to the point: “The Venus of this picture is no Aphrodite, fresh and white and jubilant from the foam of Idalian seas, nor is she Love incarnate or human passion; but she is a queen of Love who loves not herself, a desire that is unsatiable and remorseless, absolute, supreme. . . . She is the Lust of the Flesh that perisheth not, though around her loves and lives and dreams are evermore becoming as nought” (Sharp206).

The title of the painting, out of Lempriere, signifies Venus as the “turner of hearts,” which is ambiguous enough in itself. Lempriere says that she turns the heart to chastity, and if DGR follows this thought he would be imagining the turn as a consequence of the implacable revelation that his Venus brings. Such a figure is the model and forecast of a host of similar female figures that preoccupy the visions of late nineteenth- and early twentieth-century decadent and symbolist artists.

John Mitchell, of Bradford, commissioned the work in late 1863, when DGR made a chalk study of the subject. DGR worked hard at the picture in 1864 and must have brought it to some state of near completion in 1865. Up to this point the picture centered in the face of its first model, and its character can be seen best in two early sketches, the splendid study in the Fitzwilliam manuscript of The House of Life and the more finished study in the Birmingham City Museum and Art Gallery. Early in 1867 he was repainting Venus with Alexa Wilding as his model. At that point he must have introduced the labels in the upper right that were to bear the text of the sonnet he wrote for the picture in 1868. The labels, one with the text of the sonnet, appear in the two chalk studies he made for the painting, one done for Leyland, the other for Graham. DGR changed his mind about placing the text in the finished oil and water-colour replicas, however.

DGR's brother said that DGR “must at some time or other—probably towards 1873—have got it back from the purchaser, and reworked upon it very extensively”. According to WMR these late changes destroyed “the freshness and spontaneity of the entire conception and treatment” (WMR, DGR as Designer and Writer , 45).

DGR made at least two and perhaps three water-color replicas. Two are listed in Surtees and the third is mentioned there. One has Fanny Cornforth as the model; the model for a second was Alexa Wilding. These pictures were done in 1864 and 1868 respectively. The whereabouts of the third, if it existed, is unknown; it had Mrs. W. J. Knewstub for its model (Knewstub was DGR's studio assistant in 1864).

Two early notices were quite favorable: Swinburne's essay included as Part II of the Notes on the Royal Academy Exhibition, 1868 (page 49); and the commentary by Stephens in the Athenaeum of 21 October 1865 (see Stephens66). Marillier's commentary is just as full but far less enthusiastic, and the exhibition history testifies to the failure of this work to capture wide enthusiasm ( 134-135). But according to WMR the received state of the painting is the result of a badly conceived set of late revisions, probably done around 1873. WMR saw this reworked picture in a sale room in 1885 and he deplored the loss of its original “freshness and spontaneity of. . .conception and treatment.” As WMR noted: “This was only one instance out of many of an uneasy over-fastidiousness on my brother's part. . . .” ( DGR as Designer and Writer , 44-45).

The painting is most significant in DGR's career because it triggered Ruskin's quarrel with a certain “coarseness” he professed to find in DGR's work, and that he did not see in the earlier pictures, whatever Ruskin thought of the technical weaknesses he found in those pictures (WMR, Rossetti Papers 1862 to 1870 , 134, 137). The break between the two men came as a result of this quarrel. It may well be that the late revisions to the painting, so dismal in WMR's eyes, represent DGR's (conscious or unconscious) attempt to accommodate the work to Ruskin's moralized strictures.

Putting a halo behind the head of the naked bust of Venus fairly defines the startling contradictions raised by this picture (and its accompanying sonnet).

The historical significance of the picture is a highly oblique one, but nonetheless present. We glimpse it through the picture's accompanying sonnet: it refers to the Matter of Troy and that material carried for DGR, as it did for Tennyson, ominous contemporary political suggestions.

The pendant sonnet was first published in the 1868 Notes on the Royal Academy Exhibition essay by Swinburne. The poem underscores the classical/pagan subject. 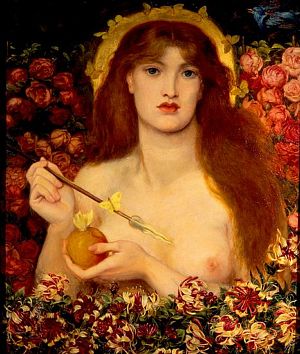