Medium: oil
Dimensions: 38 3/4 x 33 1/4 in.
Frame: Gilded flats set between tiered mouldings, with roundels centered on each flat; the roundels are stylized concentric circles. This was a design DGR used from about 1868.

The painting is more grotesque than it perhaps ought to be, given its elaborate classical accessories. But those classical materials, ornately and loosely articulated, do not lend a sense of dignity to the picture as they might be expected to do. To the contrary, they develop on one hand a bizarre and ambiguous spatial structure, and on the other an almost crepuscular atmosphere from the strange juxtapositions of artificial and natural forms.

Looking at the background setting, Swinburne and Bennett give very different reports, and this difference tells much about the peculiar spatial dynamics of Sybilla Palmifera. Swinburne, for example, offers the following account of the painting in his review of the 1868 Royal Academy Exhibition: “Behind this figure of the ideal and inaccessible beauty, an inlaid wall of alternate alabaster and black marble bears inwrought on its upper part the rival twin emblems of love and death” ( Notes on the Royal Academy Exhibition , 48). Compare Swinburne's account with the later report of Bennett: “The sibyl is . . . seated upon a throne before a marble canopied niche . . . ; lamps at either hand illuminate the carved pilasters above, that at the left representing a blindfolded cupid . . . and that at the right a skull” ( Pre-Raphaelite Circle169). These representations are incompatible but equally visible, for the play of the various curves at the top of the picture, along with the relation of the wall/pilasters to the “canopied niche,” creates a radically ambiguous sense of space. Indeed, as in a picture by Escher, this niche can appear alternately concave and convex.

The grotesque space of the picture marries with the strange color arrangements. Swinburne acutely noted that “The cadence of colour is splendid and simple, a double trinity of green and red, the dim red robe, the deep red poppies, the soft red roses; and again the green veil wound about with wild flowers, the green down of poppy-leaves, the sharper green of rose-leaves” ( Notes on the Royal Academy Exhibition , 48). But this description leaves out altogether the gold and flesh tones, which center the action of the painting in the face of the woman. That “cadence” of golds associates “Lady Beauty” with various ornamental accessories. In doing so, it recalls an analogous set of associations among the greens and reds: in all three color cases, something vital is set in relation to something artificial.

In the end, then, the “splendid and simple” color structure of the work turns as grotesque as its spatial structure. The ambiguity of vital and ornamental forms, emblemized in the figures of love and death, is perhaps most dramatically articulated in the two upper corners, where coronals of flowers surmount the wall/pilasters that bear those allegorical figures. In each case a bizarre congruence of colors and forms replicates an equally bizarre spatial event: the flowers appear to be simply laid flat to the wall/pilasters, suspended vertically in a plane of ambiguous location (in one perspective they lie at the extreme foreground, in another at the extreme background).

DGR's paintings regularly construct themselves out of these kinds of pictorial ambiguities. In this case, however, the execution seems loose and undeliberated, and leaves the viewer with the sense that the composition of space has not been effectively or carefully integrated to the other elements of the picture, in particular the carefully articulated color composition.

DGR began work on the painting before he had a buyer, but soon after (late in 1865) he persuaded George Rae to take it up on commission (the final price agreed on was 400 guineas). It was to be titled “Palmifera”, he told Rae, because it was “really to bear away the palm from all my doings hitherto” (see letters to Rae, 7 December 1865 and 16 January 1866Fredeman, Correspondence, 65. 172, 66. 5). On 21 January he wrote further that “the name Palmifera (palm-bearer) I have bestowed on the lady to mark the leading place which I intend her to hold among my beauties, and have represented her carrying a sort of palm-sceptre. Mr. Blackmore has made some mistake, as neither in oil nor water have I ever produced the design, nor anything like it, before” (Fredeman, Correspondence, 66. 6).

DGR worked on and off at the painting for the next four years, continually putting off and excusing himself to Rae for his failure to complete the work. In June 1869 DGR even accepted 200 pounds on acount from Leyland for a replica (which in fact he never completed and probably never even began), completing it finally in December 1870, much to Rae's delight (Fredeman, Correspondence, 70. 270). On 7 September 1869, as he was labouring on, DGR asked James Smetham for help with “the perspective of the Sibyl's background which I find is in a muddle for want of attention in the first instance” (Fredeman, Correspondence, 69. 149). In fact the management of the spatial structure of the picture, including the paraphernalia located in that space, is poor and detracts significantly from the effectiveness of the work.

Swinburne's enthusiastic notice of 1868 set a highly laudatory tone that the picture does not perhaps deserve. See Swinburne, Notes on the Royal Academy Exhibition , 48.

The picture is allegorically conceived throughout. Bennett's description is useful: “The sibyl is presented holding a palm-sceptre and seated upon a throne before a marble canopied niche. A festoon of olive boughs hangs over her head. Butterflies, symbols of the soul, hover at one side; lamps at either hand illuminate the carved pilasters above, that at the left representing a blindfolded cupid, beneath a circlet of roses, and that at the right a skull, beneath a wreath of poppies; carved in the niche appears a winged sphinx and, at the left, perhaps a many-headed serpent.” ( Pre-Raphaelite Circle, 169). The “lamp” at the right is, in fact, a censer.

The center of the allegory is the woman whom DGR named “beauty the Palm-giver, i.e., the Principle of Beauty, which draws all high-toned men to itself, whether with the aim of embodying it in art or only of attaining its enjoyment in life” ( DGR as Designer and Writer ,56). In a letter to his patron Rae he underscored the self-reflexiveness of the painting: “I am just commencing a picture . . . to be called Palmifera which is really to bear away the palm from all my doings hitherto.” (quoted in Bennett, Pre-Raphaelite Circle 170).

As Swinburne and others have noted, the whole picture is conceived in the Venetian manner, and makes particular homage to Titian's use of color.

The painting forms a “double work” with the sonnet Soul's Beauty . 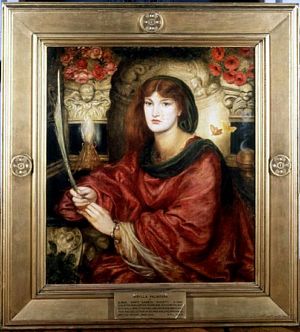 Description: Bennett offers the following description of Sybilla Palmifera : “The sibyl is presented holding a palm-sceptre and seated upon a throne before a marble canopied niche. A festoon of olive boughs hangs over her head. Butterflies, symbols of the soul, hover at one side; lamps at either hand illuminate the carved pilasters above, that at the left representing a blindfolded cupid, beneath a circlet of roses, and that at the right a skull, beneath a wreath of poppies; carved in the niche appears a winged sphinx and, at the left, perhaps a many-headed serpent.” ( Pre-Raphaelite Circle, 169). The “lamp” at the right is, in fact, a censer. See also F.G. Stephens' account, Dante Gabriel Rossetti , 64-65.
Subject: Ideal Beauty
Copyright: © Board of Trustees of National Museums and Galleries on Merseyside (Lady Lever Art Gallery, Port Sunlight)