Giotto Painting the Portrait of Dante

Medium: watercolour
Dimensions: 14 1/2 in. x 18 1/2 in.
Frame:
Note: The four key ideas in the picture—youth, art, friendship, and love—are written on the frame in gothic lettering said to have been the work of the picture's first owner, J. P. Seddon.

Other than the drawing that DGR exhibited in late 1852, this watercolour is the only finished version of the work that DGR had intended to complete in oil. The work was to have been part of a triptych, with the other two panels showing Dante as a Florentine magistrate sentencing Cavalcanti to exile, and Dante at the court of Can Grande della Scala. Sketches toward the latter survive as Dante at Verona .

Julian Treuherz explicates the implicit argument in the picture thus: “just as Cimabue's fame was eclipsed by Giotto's, so Guinizelli's was by Cavalcanti's, and by implication Dante's outshines both: in the painting he therefore holds a pomegranate, symbol of immortality. Rossetti may also have had in mind his own role in reviving the fame of his artistic forebears through his paintings and his translations of Italian poetry” (see Pre-Raphaelite and Other Masters28); and, one might well add, through his own original writings as well. 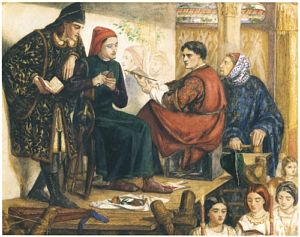