Alternately titled: The last meeting of Launcelot and Guenevere

Surtees suggests that the date (1854) was possibly added later as it contradicts information included in a letter from Rossetti to Ford Madox Brown, dated 22 October, 1855, in which the former claims that the drawing of Launcelot is near completion. Surtees also notes that this is Rossetti's “first treatment of an Arthurian subject, though this particular episode does not occur in Malory's Morte d'Arthur...This water–colour may have suggested William Morris's poem King Arthur's Tomb in Defence of Guinevere.” 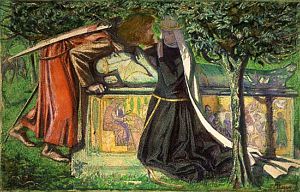