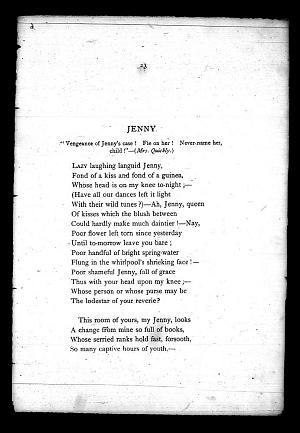 This is an imperfect set of the second issue of the Exhumation Proofs. (The Troxell Collection has another copy of this issue with a few more pages.) The first issue of the proofs was printed off on 30 October 1869 from copies of the poems made by DGR from the manuscript copies he had buried in his wife's grave in 1862. This issue was printed sometime thereafter, and it incorporates changes DGR made in the first issue. The poems were exhumed on 5 October 1869 and DGR began recopying immediately. He then used his proofs to make further corrections and additions to the exhumed poems.