Medium: oil
Dimensions: 33 3/4 x 26 1/2 in.
Frame: Its general design replicates the frame of the original painting, except, of course, for the fact that this is in two parts, with the frame separating the main picture from the predella bearing a small plaque with the picture's title. The symbolical roundels are the same, except that there are two at the bottom. The top of the frame bears two inscriptions: “Jun: Die 9: ANNO 1290 QUOMODO SEDET SOLA CIVITAS!” There is another inscription below the predella: “MART. DIE 31 ANNO 1300, Veni Sponsa di Libano.”
Signature: monogram
Date on Image: 1872
Note: The monogram and date are inscribed at lower left of the main panel.

This is a painting that DGR grew to care for, after a fairly prolonged unhappiness with a work he had begun simply for money. In all conceptual and iconographical matters the painting differs very little from the original, except that the added predella thickens both the Dantescan motifs and the autobiographical significance of the subject.

Technically, however, the work is very different indeed, as one can see most immediately if the background areas of the original are compared with this work. Here everything is articulated with much greater precision: the figures of Dante and Eros; their respectively attendant symbolic accessories (the well, symbolizing rebirth and the New Life that Beatrice is dreaming toward; and the Arbor Vitae ornamenting the backspace of Eros); and the distant cityscape architecture of Florence. In one sense the increased definition seems to give greater realism to the picture. But in another and even more telling way the symbolic resonance is increased. That effect comes about because of the way DGR has sharply defined the presence of a field of golden light. In the original painting DGR gives Beatrice an aureole (like the figure of Love) via a witty manipulation of a gold color field that instantiates nature and supernature simultaneously. Here her glory spreads across the entire left two-thirds of the picture, and even appears to hollow out by the power of its lightening the otherwise planar structure of the background areas. The result is not at all to produce a kind of realistic depth recession, though it could be read that way; rather, the gold light comes to seem an extension of Beatrice's person, a flooding glory that rhymes with the darker gold flesh of her tranced face and folded hands.

This is a far more dynamic picture than the original. This picture's energy clearly runs along three disharmonic diagonal lines of force: the lines defined by the arm of the sundial, the line joining the dove to the figure of Love, and the line of Beatrice's right arm. In each case symbolic relations are being drawn in reds and golds.

The formal balance between the main picture and the predella is neatly done: the three figures of the former have their equivalents in the latter (with Love being replaced by the train of Beatricean women) in a mirrored arrangement.

William Graham made an impassioned plea that DGR make a copy of the Beata Beatrix he had done for William Cowper because the work “has appealed to my feeling above and beyond any picture I ever saw, and the love for it has only deepened with its growth and my knowledge of its history” (Letters DWIII. 969, letter to DGR of 12 January 1871). When DGR began work on this replica for William Graham he was soon complaining about having undertaken the commission, which he did not want to do but which he accepted to accommodate one of his best patrons, and because he wanted the money (see DGR's letters to Hake, 7 August 1871 and to WMR, 10 September 1871: Letters DW III. 969, 1003). He began work on the picture sometime in July 1871 but found it “beastly work” and abandoned the effort “as hopeless,” as he told his brother. But writing on 5 September 1871 he said that he had taken it up again and that “it seems to be coming around tolerably.” He finished the work a week later, at which point he began work on a predella for the picture, which Graham had asked for. He finished the predella shortly thereafter, perhaps in October (Letters DW III 1053,1057,1060,1063,1067).

But DGR was still not really happy with the result, as he told Madox Brown at the time. The latter encouraged him to go on with the work and he did so through late 1872 and into the early months of 1873, “with much beneficial results in depth and transparency.” On 4 February he told his brother that he had “got at last the frame for Graham's Beatrice and predella, and have made them look quite satisfactory, I think, by last work;” and on the same day he wrote to Brown to thank him for his help and encouragement: “I got to work on the Beatrice and Predella and have brought them quite into harmony now, and done an immense deal to them in every way. I am really infinitely obliged to you for having induced me to take this picture up again, as it is now about as good as any other of mine, and rids me of a most serious debt” (Letters DW III. 1055,1119, 1131). A study for the predella survives.

The fame of the original picture put great pressure on DGR to make replicas and finished drawings of the work.

DGR's detailed commentary (to Graham) elucidates the iconography of the work quite well: “The picture must of course be viewed not as a representation of the incident of the death of Beatrice, but as an ideal of the subject, symbolized by a trance or sudden spiritual transfiguration. Beatrice is rapt visibly into Heaven, seeing as it were through her shut lids (as Dante says at the close of the Vita Nuova): ‘Him who is Blessed through all ages;’ and in sign of the supreme change, the radiant bird, a messenger of death, drops the white poppy between her open hands. In the background is the City which, as Dante says: ‘sat solitary in mourning for her death;’ and through whose street Dante himself is seen to pass gazing toward the figure of Love opposite, in whose hand the waning life of his lady flickers as a flame. On the sundial at her side the shadow falls on the hour of nine, which number Dante connects mystically in many ways with her and with her death. The date below the predella (31st March, 1300) is that of Dante's meeting Beatrice in the Garden of Eden ( Purg. C. 30, or 31)—that is, the date may be so calculated according to the plan of the poem. The words ‘Veni, Sponsa di Libano’ are sung at the meeting by the women in the train of Beatrice” (Lady Horner's Time Remembered (1933), page 25; also see letter of DGR to Graham, 11 March 1873, quoted in Surtees, vol. 1, 96). DGR's sister Maria supplied the date of Dante's meeting with Beatrice in the Purgatorio Cantos XXIX-XXXI (see Letters DWIII. 1087).

Various commentators point out that the poppy borne by the mystical bird (a figure of the Holy Spirit) emblemizes both death and chastity. Stephens, presumably with the concurrence of the artist, says that Beatrice is sitting “in a balcony of her father's palace in Florence. The picture places us in the chamber from which the balcony opens, and the damsel's form is half lost against the outer light, half merged with the inner shadows of the place. She is herself a vision while . . . the heavenly visions of the New Life are revealed to the eyes of her spirit. The open window gives a view of the Arno, its bridge, and the towers and palaces of that city in which Dante and Beatrix spent their lives till the fatal month of June 1290, when she died, and, as the poet tells us, ‘the whole city came to be, as it were, widowed and despoiled of all dignity’. . . In the background the poet Dante attentively regards the figure of Love, the ideal Eros of his vision, who, holding a flaming heart, passes on the other side of the picture heavenwards, and seems to sign to him that he should follow in that path” ( Stephens64).

In this version of the subject (and in contrast to the original painting) DGR clearly sketches in the forms of the Ponte Vecchio and the Campanile, less clearly the figures of the Duomo and the skyline of the Palazzo Vecchio, thus particularizing the image as a cityscape of Florence.

The commentary on the original painting applies here as well. This replica's predella, however, elaborates both the Dantescan elements of the picture as well as its effort to recapitulate the manner of medieval and early renaissance religious pictures.

The commentary on the original painting applies here as well. This replica's predella, however, elaborates both the Dantescan elements of the picture, and in particular deliberately calls out the crucial Beatricean text in Dante's Purgatorio Cantos XXIX-XXXI. 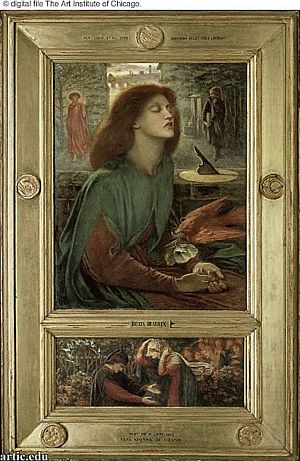