The Blessed Damozel (with predella)

Medium: oil
Dimensions: 68 1/2 x 37 in.
Frame: Flat gilded oak with symbolic designs and four stanzas of text of the DGR poem. A digital image of the frame is available.

Production Date: 1875-8
Exhibition History: R.A., 1883 (no.313); Manchester, Royal Jubilee Exhibition, 1887 (no.698); Fogg 1946 (no.83)
Patron: William Graham
Date Commissioned: February 1871
Original Cost: £1157, including predella
Note: Graham commissioned the work in 1871 and requested the predella on 31 December 1877, after the main part of the picture was complete.
Model: Alexa Wilding sat for the Damozel.
Model: Wilfred John Hawtrey sat for the child–angel.
Model: May Morris probably sat for the left–hand angel.

Sources of the Work

Literary Source: Iconologia, Filippo Pistrucci, 1821
Editorial Note: This Aldine book was in the library of DGR's father, and its illustrations of emparadised female lovers clearly inspired DGR. WMR says that this book made a great influence on DGR, in particular its “coloured allegorical designs” ( Family Letters , vol. 1, 62) of women.
Literary Source: Vita Nuova, Dante Alighieri
Myth: vision of paradise
Culture: Christian
Geographical Scene: Broadlands
Other Information: It is said that the beechwoods in the predella were painted near Broadlands, the home of the Cowper–Temples. But the report is contradicted by the fact that DGR left Broadlands in 1876, never to return, and the predella was done in 1878 ( Surtees, vol. 2, 142 and n).

The Blessed Damozel is probably Rossetti's most famous painting. It is certainly his most elaborate presentation of the subject that interested him beyond all others: the relation of an emparadised woman to her earthly lover. The pictorial version of the subject comprises a later commentary or visual interpretation of the poem by the same title that Rossetti had written much earlier, in 1847. The subject is also at the heart of his great translation project that culminated in his collection of stil novisti verse, The Early Italian Poets .

As he was beginning the picture DGR made an interesting technical comment in a letter of 14 May 1873 to his friend Ford Madox Brown. He pointed out that he had been doing some studies for the damozel's head as completed pictures in their own right. These picures—now known as the Sancta Lilias paintings—determined him “to set to work and paint a picture right out from it [i.e, from the Sancta Lilias drawing he had made for Leyland], as I really believe such pictures have more unity if one does not do them from nature but from cartoons” (Doughty and Wahl, Letters, vol. 3, page 1170). The comment points directly toward the hieratic style DGR was aiming for.

The general compositional differences between the main picture and its predella are important. The poet reclines in a space that is realistically (if also poetically) defined: a natural landscape scene whose winding river defines a space receding toward the pictorial infinity on which the poet's mind is clearly focused. Indeed, his eyes gaze upward to the face of the emparadised damozel, who is the central figure in the transcendental realm represented in the main picture, where an iconic structure organizes the pictorial elements. Three planes carry the images in a shallow space close to the picture plane. The painting has almost no depth.

As in so many of DGR's paintings, light emanates from within, its source being dispersed to those areas that echo the radiant flesh of the damozel's face. The power of this immanent light is most dramatically suggested in the differential representations of the roses in the picture. Behind the damozel, where her face does not pour a direct illumination, the roses are red, whereas the roses that cascade about her arms and below her face lighten into various hues of gold. This radiance appears throughout the painting in various moments of yellow and gold. Perhaps most startling are the scattered golds at the top of the picture near the embracing lovers. Each seems to represent a moment when the picture allows the viewer to glimpse the presence of some ultimate gold background. As such, these moments suggest the possibility of an aerial perspective (like the one in the predella, where a white sky defines the infinite recession). But DGR's point here is to locate a crucial difference between the main picture and the predella. The main picture's glimpsed gold “background” lies in the shallowest of spaces, and suggests in fact the absent presence of the gold ground chacteristic of Byzantine–influenced iconographic pictures.

The picture is a tightly organized arrangement of greens, golds, and reds. All the colors have hieratic rather than naturalistic significance.

Commissioned in February 1871 by William Graham, DGR apparently began to plan out and perhaps make studies for the picture at that time ( Diary of W.M. Rossetti, 45). The idea for such a picture was raised many years before by T. E. Plint, who proposed to DGR that he make a picture on the theme of the poem for some sixty pounds, but DGR declined and the commission was taken up by Burne–Jones (see letter to Brown of 8 December 1856 [Doughty and Wahl, Letters, vol. 1, 307]).

The Fogg painting, begun in 1875, was completed (except for the predella) in April 1877 (the price of £1000 having been set in December 1873). In December 1877 Graham asked that the predella be added (for another £150). The predella—which was executed in five or six weeks—was to represent the damozel's lover disconsolate on earth, and looking, through dark autumnal foliage, towards the perturbed sky. “I hardly know if the idea for this predella . . . came from Rossetti himself, or from Mr. Graham; perhaps rather from the latter” ( DGR as Designer and Writer 104). After finishing the predella DGR commented on the picture in an letter of March 3, 1878 to Mrs. Cowper–Temple: “I have now done the predella of the eternal Blessed Damozel & placed the 2 in frame together (having also much brightened the picture itself with flowers [roses] in hedges, aureoles round the heads etc.)” ( Surtees, vol. 1, 142)

Various studies for the finished picture were made, the most important being those for the central figure. These culminated in the finished oil Sancta Lilias , now in the Tate Gallery (Surtees no. 244C), dated by DGR 1874, and they include several important colored drawings of the same title. In a letter to H. T. Dunn (ca. 1873) DGR wrote: “In a day or 2, I expect to be sending you an oil head—Blessed Damozel, being that one on a red ground which you know, now cut down to a small single head picture, as I have begun the larger one over again.” This “larger one” would become the Fogg painting.

The contemporary fame of DGR's poem generated a desire among various Rossetti enthusiasts for a pictorial representation of this quasi-mythic damozel. The numerous versions, finished studies, and replicas of the subject (and the specific original painting) testify to the power that this work had at the time. It remains perhaps DGR's most celebrated work.

Two early reviews have been important: first, Stephens' enthusiastic review (of the Fogg original painting) which appeared in the Athenaeum for November 1879 (and later incorporated into his book on DGR's work); then Sidney Colvin's less enthusiastic notice in the Magazine of Art VI (1883) (see especially 183). The latter, it should be noted, was directed specifically at the Port Sunlight Gallery's replica that DGR sold to Leyland in 1881.

DGR's picture is an erotic variation on a distinctively Venetian style of representing the enthroned Virgin Mary, i.e., at half-length. In the traditional pictures, the Virgin usually holds the Christ child and is surrounded by attendant angels and saints. Here the child is absent, although his surrogate in DGR's painting is clearly the damozel's lover, pictured in the predella. The saints and angels of tradition are refigured as the group of embracing lovers (or as the child-angels put in the Leyland replica). The lover in DGR's predella also recalls the votive figures that appear in any number of public or domestic votive Madonnas, where the picture is made an offering for some public or private mercy. The votaries typically appear at the feet of the Madonna (if it is full length), or in some corner or lowly place that suggests the votary's humility. DGR's picture, while clearly personal in its votive aspect, necessarily also carries a public and even political significance: for in the context of DGR's programmatric Pre-Raphaelite ideals, the damozel (like Dante's Beatrice) is a guiding personal and social emblem. Important precursors of DGR's version of this widely dispersed treatment of the Madonna would be Simone Martini's Maesta fresco (1315), Dürer's various woodcuts, and Cimabue's celebrated Trinita Madonna (ca. 1270) in the Uffizi, which has come to stand as an index of the change from a Byzantine style of treatment to a more human and sympathetic style.

The flowers in the picture symbolize purity (the lilies) and passion (roses). The varying hues of the latter symbolize the range of spiritual-erotic intensities DGR associates with the damozel.

The six visible stars of the damozel's corona play a witty game with the picture's accompanying poem, where these stars are said to be “seven.” They are laid down in the form of the Pleiades, and in the picture the missing seventh recalls Merope, “the lost Pleiad,” who was cast out of the classical heavens for having fallen in love with a mortal man.

The predella turns the painting into a diptych, i.e., a manifest allusion to a common form of medieval painting.

Rarely noticed in the picture is the figure of the Holy Ghost, who appears as a small dove at the very top and center of the work, presiding over the whole scene. He is represented as a one of the picture's moments of radiant gold, rhyming with the string of six intervals of the same gold that run in a waving line across the top of the picture. These appear to the eye as intervals or apertures into a primal field of golden light such as one finds in religious iconographs. They also connect to the gold that is the identifying radiance of the damozel as well as the gold of the stars that crown her head.

The materials, in particular the Marian lore, that impinges so strongly on the pictures's earlier companion poem all have relevance to the painting as well.

The literary influences on the pictures's earlier companion poem—most importantly, Dante's Vita Nuova and the courtly love works of the poets in Dante's tradition—all have an equally clear relevance to the picture.

By the time DGR came to make his painting on the Blessed Damozel theme, the Dantescan story of the figure of Beatrice had acquired a complex personal relevance to DGR himself. Depending on how DGR viewed her, the damozel of the painting might be imagined in terms of his wife Elizabeth, who died in 1862, or in terms of Jane Morris, the woman he loved though she was married to his friend William Morris.

The fact that DGR chose Alexa Wilding as his model for the damozel is interesting in several ways. Most important, Wilding functions in the painting as a Dantescan “screen–lady” for DGR's living Beatrice, i.e., for Jane Morris. Also, in various paintings he seems to have used Wilding's face emblematically, as an ideal image that could be imagined to transcend the often painful conflicts of love that DGR experienced in the most personal way in his own life. 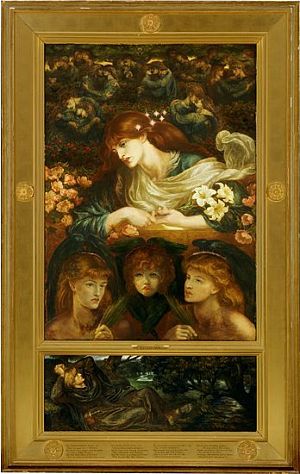 
Note: The first four stanzas (from the 1873 Tauchnitz edition) of The Blessed Damozel poem are written on the base of the frame, which was designed by DGR.